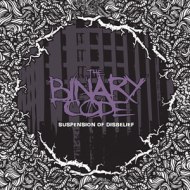 In a world of trends, some of the finer things of life go criminally unnoticed. This rings all too true where music is concerned. For every fashion show masquerading as a band that lands a deal and gets shoved down our throats, there are a hundred much more deserving acts out there slugging it out on their own. This rarely stops the dedicated and it sure in the hell didn't stop THE BINARY CODE. These Jersey-based prog-deathers refused to buy into the notion that it takes a label to be heard and have managed to create quite the buzz for themselves and their debut, "Suspension Of Disbelief".

For starters, "Suspension Of Disbelief" sounds and feels very much like a DIY recording, a fact which actually benefits the album as it lacks that over-polished vibe you typically get on discs of this ilk. The just-raw-enough-to-sound-real mix allows guitarist Jesse Zuretti's technical blend of death, prog and jazz chops to flow from amplifier to eardrum with little effort or interference. As you've probably assumed by now, THE BINARY CODE gets a lot of comparisons to BETWEEN THE BURIED AND ME, but in no way are they a clone. Like the aforementioned proggers, TBC excels in smashing through the walls that separate the worlds of metal and jazz, but these Jersey boys go about it their own way. For an album this tech-inspired, this isn't a case of the musicians trying to outdo one another or everyone they encounter. The band places just as much focus on groove and songwriting as they do on proficiency. Tracks like "Mechanical Seas" and "Ghost Planet" are simultaneously cerebral and catchy enough to appeal to pit jockeys and mathematicians alike.

Another attribute "Suspension Of Disbelief" carries is that the songs themselves are kept at listenable lengths. With the longest tune clocking in at the five-minute mark, we're spared any grand epics that risk losing the listener's interest. As a whole, the album flows like water from song to song with jazzy interludes and clean mid-sections providing a nice break from the metallic revelry. None of those breaks (not breakdowns, which the record is blissfully free of) sound forced or out of place either; another factor that speaks to the caliber of songwriting going on here.

As impressive a debut as this is, it's not a flawless one. There are a few times on the disc, mostly towards the end, when the train feels like it's about to derail. Whether it's because the band tries to cram too much into to a small space or just rushed through the process, the chaos almost becomes uncontrollable on occasion. This is forgivable though, as THE BINARY CODE has already left one hell of a mark on the progressive death scene. "Suspension Of Disbelief" is a challenging, yet very listenable album that ensures THE BINARY CODE is one name you'll be hearing a lot in the future.