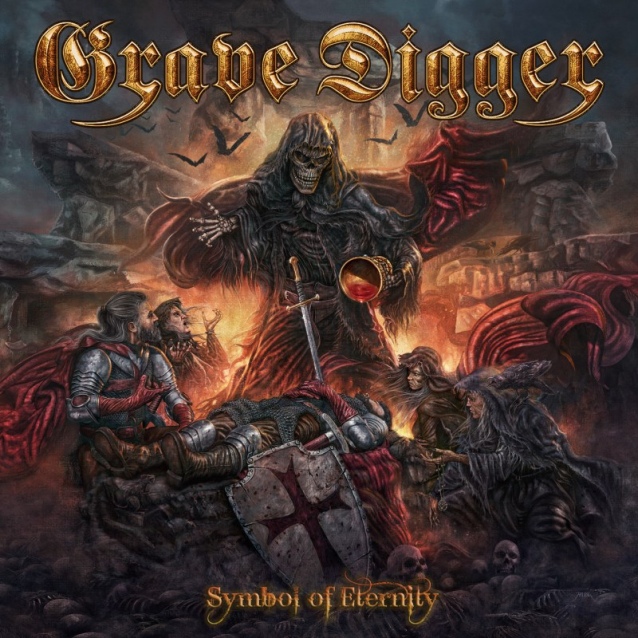 When it comes to the grand heavy metal scheme of things, a band like GRAVE DIGGER can easily be overlooked. The German veterans have stuck to their guns with great alacrity over the last 40 years, never deviating from a righteous old-school path, but always in search of another windswept and war-torn story to tell. Always slightly heavier than you remember them, GRAVE DIGGER have been a reassuring, unpretentious presence for a long time.

"Symbol Of Eternity" — the band's 20th studio album! — starts with a momentous overture, and then delivers 11 bombastic and melodramatic heavy metal songs, all conceptually concerned with the Knights Templar, which makes this a sequel of sorts to 1998's "Knights of the Cross". It is undeniably familiar territory, but GRAVE DIGGER are comfortable with their long-held musical identity and never seem to run out of musical ideas either.

Devoted fans will be pleased to learn that "Symbol of Eternity" is a top tier GRAVE DIGGER record: up there with the early classics, the "Tunes Of War" to "Excalibur" era, and 2012's "Clash of the Gods". An underrated classic, "Clash…" was guitarist Axel Ritt's second album with the band, and the moment that his songwriting partnership with the indestructible Chris Boltendahl really started to flourish. A decade on, the duo are simply soaring. It is obvious from the opening "Battle Cry" that energy levels are at a peak. It's a classic GRAVE DIGGER anthem, but there's fresh venom in the delivery. Similarly, "Holy Warfare" is an all-out rager, with speed metal's black wind at its back and a tangible sense of mortal loss. The more epic "Symbol of Eternity" gets, the more impressive and irresistible it becomes. "King of the Kings" is a simply fantastic song: stately and ominous but blessed with a giant chorus and a mesmerizing burst of Brian May-style guitar histrionics, it should be the first new cut on future set lists. "The Last Crusade" is a triumphant but turbulent squall of machine-gun riffing, mellifluous soloing and unexpected mood swings, with another core refrain fit to haunt the battlefield, while the title track's doom-laden swagger and DIO-esque detours lead to one of the most evocative yarns in GRAVE DIGGER history.

Ending with a straightforward but eminently charming cover of "Hellas Hellas" (originally by Greek singer / songwriter Vasilis Papakonstantinou, and who actually pops in for a cameo),  recorded in tribute to GRAVE DIGGER's fiercely loyal Greek fan base, "Symbol of Eternity" is more of the brilliant, bloody-minded same, but slightly more brilliant.