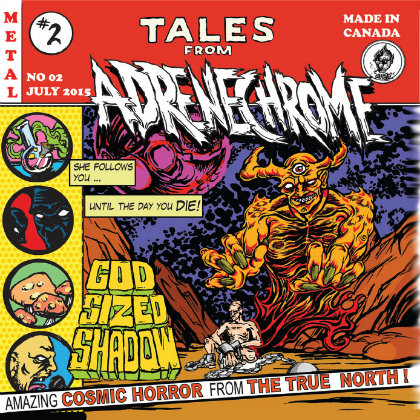 Ontario's ADRENECHROME derive their name from the drug referenced in the dark comedy film "Fear and Loathing in Las Vegas", as well as the book and other places. By association, any word containing a variation of "adrenaline" within implies something fast and crazed. Such is the way of this spastic quartet, well bent from the center of conventional metal music. Rawk, crunk, prog, thrash, even freaking banjo figure into ADRENECHROME's brand of fringe metal. Pop a top, take a swig and hold on tight!

ADRENECHROME's salute to EC Comics adorns the cover their latest offering, "Tales From Adrenechrome", and is an instant grab. Yet it's the "back-cover" art, which features a cartoonish nude better set in the "Saga" comics listening to a slew of RUSH, VAN HALEN, David Bowie and Ozzy Osbourne albums, that drops hints at where ADRENECHROME's audile playground is (along with MASTODON, Stringbean and jazz legend, Dave Brubeck).

The goofy ride taken on "Tales From Adrenechrome" begins with the lighthearted, riff-plugged "A Familiar Face", which ADRENECHROME describes as meaning to "lull the listener into a false sense of security." Ringing spritely at first, like a dreamy TRANS-SIBERIAN ORCHESTRA yule glide, "A Familiar Face" turns into a nutty WEEZER promenade before dropping a dark chord to finish, and then ripping into the thrashy lines of "Lockstep". Slowing the bedlam with rock-banging nods to GUNS N' ROSES and VAN HALEN, "Lockstep" then bops into a pissy set of crunk bars. These are followed up by a brief surf splash before repeating the schemes and dropping a hi-hat-led swing groove, which sets up a moshed-up riff fest.

In some ways, what ADRENECHROME does is in the vein of BETWEEN THE BURIED AND ME, only with less grind and less articulation. That's not to say the band members aren't fluid musicians. What they pull off with "Black Brubeck" is impressive; the song is loaded with prog chops and wacky banjo plucks, which break up it's pounding slog. "God Sized Shadow" is stacked way high with amplification between Mike Van Dyk's bombing bass and the railing guitars of Tim Kehoe and Chris Friesen. Friesen's tradeoffs been dank cleans and squelchy rasps add to the song's slow bang. Of course, you can expect a soothing progression to change the dynamic of "God Sized Shadow", and of course there has to be a black metal burp inside a song with that name. Style points awarded to ADRENECHROME.

One of the most hectic, seemingly directionless tunes on the album is "Hideous Appetites". Its wayward inanity eventually drifts into a slow, bobbing nod with squealing KISS licks (and later, AEROSMITH),which give it a fun kick. The eruptive sludge carnage of "The Lead Elephant" closes "Tales From Adrenechrome" with such a loud and chop-filled finish the MASTODON crew should give it a few thumbs up.

ADRENECHROME are all over the damned place, but what they're doing is hipster metal cool with entertaining riff barrages and convulsive tom rolls, which make their sheer geekiness more than forgivable.