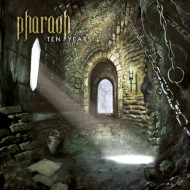 How in the hell will PHARAOH ever top "Be Gone"? Those same thoughts were swirling in the heads of fans and critics after its predecessor, "The Longest Night", was released too. Don't hurt your brain thinking too much about it just yet, as in the interim you've got "Ten Years", a very strong EP that had been in the works for what seems like forever in PHARAOH years. Incidentally, that peculiar method of time keeping is explained in drummer Chris Black's (SUPERCHRIST, DAWNBRINGER, HIGH SPIRITS, Planet Metal Records) interesting liner notes about the EP and the band's history.

What's "Ten Years" all about then? It's about four songs that didn't quite fit the lyrical/musical themes of the phenomenal "Be Gone" (as Black also discusses in the liner notes),but are in no way throwaways, as well as two covers. Let's face it, PHARAOH is incapable of writing sub-par music and even if they did happen to record something about which they weren't satisfied they sure as hell wouldn't release it. Do the four originals represent the act's distinct and impeccably written/ performed interpretation of traditional heavy metal? No doubt about it. Do they reach the heights that defined the material of "Be Gone". Not quite. That only means that instead of being absolutely amazing they are only damn good. The title track is perhaps closest in form to the songs from the last two releases. The tune is less complex/layered than the music of "Be Gone", but just as penetrating and memorable, and features a chorus that is recognizable only as PHARAOH. The track also features guitar solos from Jim Dofka and Keith Barnard. The IRON MAIDEN influence is heard most prominently on "When We Fly", a track on which vocalist Tim Aymar (CONTROL DENIED) shines especially bright. "Nothing I Can Say" with its grand opening and guitar lines from Matt Johnsen that seem to dance in the air and "Reflection and The Inevitable Future", which in the most relative of terms is the EP's least convincing, are both fine additions to the catalogue that grow stronger with each play.

Interestingly enough, it is the two cover choices that add immense value to the EP. Both are surprising as PHARAOH renditions, but it is NEW MODEL ARMY's "White Light" that soars because of a beautiful chorus that Aymar makes his own and an arrangement that allows the band to work in spaces atypical of its original compositions. The band's version of SLAYER's "Tormenter" would be almost unrecognizable to all but devoted fans of the hallowed act. Originally appearing on 1983's "Show No Mercy" debut, the song is given the complete PHARAOH trad-metal makeover and must be heard to be believed.

Before wrapping up, a word about Johnsen is in order. Matt isn't just a guitar player; he is that rare musician that has a developed a signature sound, one that is integral to the PHARAOH approach, traits that are apparent on "Ten Years", though maybe not to the same extent as on "Be Gone".

That an EP consisting of two covers and material left over from the "Be Gone" sessions ends up being better than the majority of trad-metal releases speaks volumes about the brilliance of this band. Think about it; an "8" rating for a PHAROAH album seems low when viewed within the context of how most reviewers rated "Be Gone" and "The Longest Night". That's just insane and for that you should be grateful. World domination is now within reach.