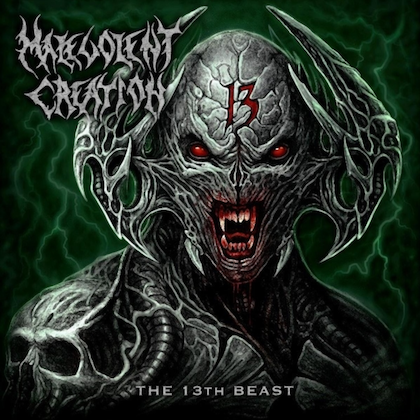 Even though CANNIBAL CORPSE is rightfully known as a Florida death metal band, the genre leaders were actually originally from Buffalo, NY. Similarly, the long-running Florida death metal machine MALEVOLENT CREATION had originally migrated from the same city in New York. Connecting the dots on the death metal map may seem like anecdotal metal nerd banter, but the geographical backdrop and history suggests more. The fact that a bunch of long-haired teens threw caution to the wind by making the necessary sacrifices needed to move across the country for death metal speaks volumes about their tenacity and passion to succeed within the niche underground subgenre.

MALEVOLENT CREATION never garnered the same kind of attention as the aforementioned CANNIBAL CORPSE and the rest of the Sunshine State's big four of death metal—a list that also includes DEICIDE, OBITUARY and DEATH—but the group has carved a name for itself in death metal's history by virtue of its perseverance and memorable songcraft. Early nineties barn burners like "The Ten Commandments" and "Retribution" aren't simply classics within MALEVOLENT CREATION's catalogue: they are arguably some of the most important albums within the American death metal canon. Now, at the onset of the new year and over 30 years after the band's inception, the death metal maven has unleashed its 13th long player, aptly titled "The 13th Beast".

This is the first MALEVOLENT CREATION release since the untimely passing of Brett Hoffman, the band's original vocalist who rejoined the band for two additional stints. Hoffman died in 2018 from colon cancer. His most recent period of involvement lasted a decade and concluded, recording-wise, with the unit's previous album, "Dead Man's Path". In spite of the significant loss to the death metal community at large, and very specifically to the death metal familia that is MALEVOLENT CREATION, sole original member and guitarist Phil Fasciana remains steadfast in his march toward extreme metal glory with an undeniable sense of tenacity. Sure, the presumable passion on "The 13th Beast" is in tow, and the individual and collective performances are on point, but the final product is far from exceptional.

That isn't to say that the album is bad. While there are some tasty licks and savory transitions, at the end of the day, "The 13th Beast" is essentially by-the-numbers death metal. For every lip and fist clenching opening burst on the likes of "End The Torture" or "The Beast Awakened", there are meandering and yawn-inducing sections like the finale of "Born Of Pain" that are as enticing as a lecture on geopolitics on a kid's final day of school before summer. "The 13th Beast" proves to be a letdown because it falls short of what it could have been. While informing the songs with his tried-and-true expertise, rhythm guitarist Fasciana leads the lineup that he revamped from the ground up a couple of years ago. And in addition to strangling the six-stringed axe, Lee Wollenschlaeger spits out death grunts in a manner that's noticeably similar to, yet not quite as unique nor formidable as, that of his predecessor. Drummer Phil Cancilla offers up a performance that is equally skillful yet perfunctory at best and void of distinct character. Bassist Josh Gibbs is responsible for the most notable and impressive of the individual performances with a meaty and dexterous display of low-end soundscaping.

It's admirable that MALEVOLENT CREATION is 13 albums deep into its career, and that it continues to stick to its guns. The unit's new blood does relay a handful of fresh ideas and sounds, but perhaps a relatively more adventurous approach might yield more fruitful results next time around. A new cast of characters may be an exciting prospect—or a nauseating reality, depending upon whom you're asking—but whatever the case may be, a known band can't simply rely upon its namesake for continued relevance.