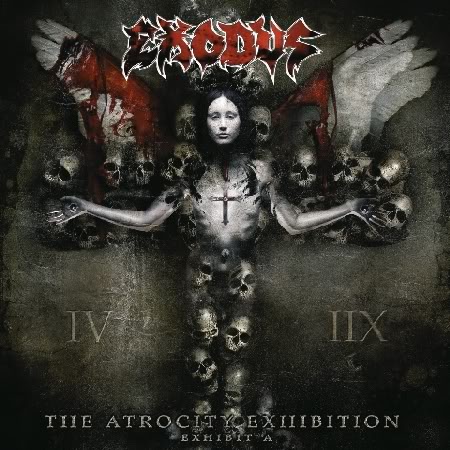 The Atrocity Exhibition: Exhibit A

Riding a career wave that's reached the point of statistical impossibility, EXODUS deliver their second album with vocalist Rob Dukes and their third since reforming. Hell, if Gary Holt is to be believed, and the album title to be trusted, they're racking up number four as we speak and will have it out sooner than later. Not sure what audio Viagra the man has been crushing up and snorting, to allow him to not only keep the band together when its lineup gradually disintegrated on him, but to take the band's music in such an improbably dark and heavy direction as to bash naysayers into submission — but whatever he's doing, he should keep on doing, because "The Atrocity Exhibition" rules.

Stylistically, it's not too far off from 2006's "Shovel Headed Kill Machine". If anything, it's even more leaden and grim, riffs used as blunt force weapons, bass churning, drums thundering down the mountain (courtesy of the returned Tom Hunting). Dukes is Dukes; if you're hung up on one of the band's previous singers and "Shovel Headed Kill Machine" didn't convince you, this record won't either — but he's as vein-bustingly aggressive here as ever, and his rabid bark suits the take-no-prisoners attack of the music just fine to these ears. The riffing, of course, is simply godly, an exhausting nonstop barrage of thrash picking broken up by scorching soloing from Holt and Lee Altus.

EXODUS at their best has always been able to stay catchy even at their fastest or most brutal, and while they come dangerously close to losing that accessibility at points in the overdriven guitar murk of "The Atrocity Exhibition", there's still plenty of hooks to latch onto in songs like "Funeral Hymn". There's even a few lines of relatively clean singing (cue thrash-head pants-shitting worldwide) in "Children of a Worthless God", an otherwise seething double-kick-driven tank of a tune — it fits the music, and it certainly doesn't make the song any less heavy, so spare yourself the hyperventilating.

For every catchy, straight-ahead moment like "Funeral Hymn" or the swaggering "As It Was, As It Soon Shall Be", there are moments of teeth-grinding intensity like the title track (its weird, dissonant main riff is almost unsettling, something you'd expect to come out of NAPALM DEATH's toolbox) or the cage-rattling "Iconoclasm" (a song driven by Hunting's insistent, propulsive performance). There's even a welcome blast of old-school thrash (at least as old-school as this futuristic steamroller of a record could produce) in "Bedlam 1-2-3", something I hope rears its head just a little more on "Exhibit B". It's a pretty dynamic ride, though the sheer sonic weight of the whole thing requires a coupla listens for the highs and lows to really sink in. "The Atrocity Exhibition" is a battering ram of thrash metal, all grown up and gone feral, ugly and snarling and unlikely to be housebroken.

If I had a complaint at all, I might mention that the guitar tone is a little abrasive — it seems to almost bite at the eardrums, especially in headphones, and it's cranked through the roof to take your head off. But that's kinda latter-day EXODUS in a nutshell, isn't it? They're not only still vital and scrappy as any band of 17-year-old punters, but they're vicious now, more so than ever in the old days – credit it to the mechanized grind of modern-day production, better musicianship, or just a gutful of old-guy bitterness and bile, but it's true. "The Atrocity Exhibition" may be good violent fun, but “friendly" got excised from the EXODUS dictionary some time ago. Brutal, massive, and wholly impressive stuff.