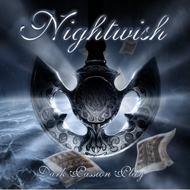 Just in case you thought NIGHTWISH was gonna lose their confidence after a well-publicized vocalist change and years off from the studio, feast on this: "The Poet and the Pendulum", the opening track on "Dark Passion Play", is a fourteen-minute-long, five part epic, what would have been an album side in less gluttonous times, and the kind of sweeping anthem that lesser bands would hang an entire career on. That NIGHTWISH tosses it out as just the first salvo in their new campaign is both a bold step back into the limelight, and a sign of the self-indulgence that has emerged as the band's biggest flaw.

First and foremost, of course, the vocalist must be mentioned. Annette Olzon is a bird of a different hue, for sure, eschewing Tarja Turunen's operatic soar for a more rock-oriented (and, it must be said, commercial) voice. She's a great singer, and her performance here is as spunky and heartfelt as fans could hope for — her more populist tones might actually free the band up to explore a more dynamic sound. Some will cry sellout, of course, but a situation as volatile as the drama-soaked replacement of a beloved female singer is gonna get the snuffling hordes out to complain in full force anyway. Kudos to NIGHTWISH for finding someone bold and expressive enough to fill Tarunen's shoes, and to Olzon herself for having the (figurative) balls to take on such a scrutinized position.

Musically, the band is more full and lush than ever, whether knocking out epics like "The Poet and the Pendulum" or condensing their verdant metal vision into shorter “hit single" material like the very commercial "Amaranth" and "Cadence of Her Last Breath". Lead single "Bye Bye Beautiful" features a lot of vocals from bassist Marco Hietala, not only a nice counterpoint but a diplomatic save – the vocals he's shouting are poison-pen notes to Tarunen, barely disguised if at all. It might have been unseemly (if not nonsensical) for Olzon to say things like “did you ever listen to what we played/did you ever let in what the world said?" And if you think that's bad, "Master Passion Greed" is nothing less than a lyrical kick in the balls to Tarunen's husband/manager, delivered again by Heitala over some of the angriest, heaviest and most bombastic music on the record. While some may consider this continued public airing of personal matters to be in questionable taste, there's no denying the raw nerve emotions at play here.

In the middle of the record we find the gems — the ballad "Eva" and the swirling, symphonic "Sahara". The latter, especially, is "Dark Passion Play" at its best — an entire orchestra backing a strong song with Arabian overtones, overflowing with pathos and real emotion. Unfortunately, after "Sahara" things get a bit pedestrian, with a few padded songs and quizzical choices in arrangement (the thrash part in "Whatever Brings the Night" seems particularly random and tacked-on, while "For the Heart I Once Had" strays dangerously close to girl-pop territory). None of the final songs are bad, necessarily, it's just that after so much high-quality music, the pedestrian tracks stand out that much more. A little judicious editing (and the saving of a few of these tracks for b-sides, perhaps) would have made "Dark Passion Play" a stronger, more focused album.

The good thing about NIGHTWISH's self-indulgent streak is that you can skip over the filler tracks on "Dark Passion Play" and still have enough good music left over to feel like you got your money's worth. There can be little doubt that NIGHTWISH has recovered from their lineup woes stronger than ever, and ready to ride the wave of their current worldwide popularity into a future that's as bright artistically as it is commercially. "Dark Passion Play" may not be a masterpiece throughout, but it's got enough moments of symphonic metal bliss to warrant a high recommendation.