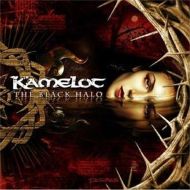 KAMELOT have walked the line between the prog/power scene and a more pomp AOR sheen for some time now, never descending too far into galloping European cliché, and maintaining a sonic toughness that keeps them in the metal camp. The addition of ex-CONCEPTION singer Roy Khan and the release of 2000's "The Fourth Legacy" brought the band to a higher international profile… everywhere, it seemed, but their home in the United States, where they're relegated to festival appearances to satiate the faithful few.

While "The Black Halo" contains nothing that will cross over beyond the already-established prog/power camp, it is inarguably KAMELOT's best work, an album akin to QUEENSRŸCHE's "Operation: Mindcrime" and NEVERMORE's "Dreaming Neon Black" in terms of ambition, scope and musical breadth. The band doesn't stray far from their formula — you won't find much in the way of surprises on a KAMELOT record. But don't let that keep you from recognizing the sheer attention to detail and painstaking craft these guys put into their music. Khan's vocal lines are crystalline and flawless, while guitarist Thomas Youngblood continues to be a master of tasteful understatement, allowing the spotlight to shine on Khan's vocals and on the superb arrangements.

"When the Lights Are Down" will get the blood pumping for more traditionally-minded power metallers, while the title track showcases the darker, heavier tone taken on this concept album. The orchestration of the backing vocals alone on this song put KAMELOT on a higher plane than just about any of their peers. Opening track "March of Mephisto" features a startling cameo in the chorus from DIMMU BORGIR's Shagrath (okay, so maybe KAMELOT can surprise a little),plus a symphonic boost from STRATOVARIUS keyboardist Jens Johanssen. Interludes and segues tie the album together masterfully, expanding the genre's limited palette and creating a truly dynamic and exciting listen from start to finish.

Precision and passion meet on "The Black Halo", making it one of 2005's most impressive releases. Sure, there's a glut of this stuff coming out of Europe, and has been for a while — but no one else does it nearly this well. KAMELOT are destined to rise above the Sascha Paeth/Miro power metal hit factory, and take their place as heirs to the throne of QUEENSRŸCHE and SAVATAGE. Stunning.