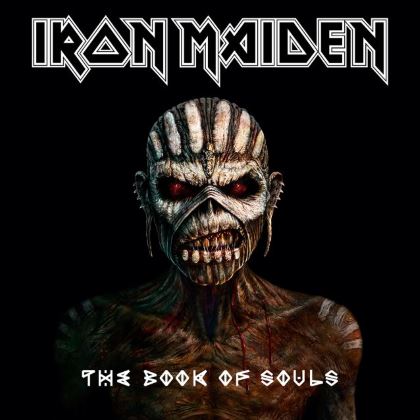 The Book of Souls

It's been five years since "The Final Frontier" and speculation arose whether or not we'd see another IRON MAIDEN album manifest, given Bruce Dickinson's battle with a cancerous tumor on his tongue earlier this year. Put the kibosh on any rumors otherwise; Dickinson and MAIDEN return not only with their sixteenth outing, but a double album, "The Book of Souls". Good news, folks, it's fantastic.

In the time between albums, the aviation-crazed Dickinson bought a replica Fokker Dr. I triplane, which he exhibits at flight shows and the band introduced its own ale, Trooper, co-formulated by Dickinson with Robinsons Brewery in Stockport, England. Thus the guys hardly sit on their laurels, no matter the duration between albums. Reportedly all six members of IRON MAIDEN came to "The Book of Souls" with an hour's worth of written parts and the expectation of about fifteen minutes usage each. This collaborative mindset produced 92 minutes of heavy metal heaven as "The Book of Souls" is IRON MAIDEN's most comprehensive and confident work since "Brave New World" and for certain one of their finest achievements overall.

Though Steve Harris maintains "The Book of Souls" is not a concept album per se, the depiction of Eddie as a painted Mayan (who were big on the maintenance of souls for the afterlife) and the superb effort put into this project indicates a suggestive life after death, if you like. Consider the titles of MAIDEN's previous three slabs. While "Dance of Death", "A Matter of Life and Death" and "The Final Frontier" are all worthy IRON MAIDEN albums, subjectivity prevails in fan attitudes toward those recordings. "The Book of Souls" should conjure a near-universal praise of glory from the MAIDEN faithful.

The opening of "If Eternity Should Fall" is an awkward splash of squelchy synths, but hang through it. Bruce Dickinson is there to hold your hand as the trusted voice of guidance he is and the band plants down soon enough, staking a traditional MAIDEN march through the 8:28 endeavor. Nicko McBrain's tumbling rolls at the end of each bar keeps the pace through all of the familiar notes and chords MAIDEN fans hum in their sleep. The payoff comes with a tribal roll ushering a picked-up solo section. Though things don't rocket here, the break-in is solid, setting up for a final round of the chorus and then an awkward demonic narrative introducing the album's figurative harvester of souls. Frankly, it's a nutty move, but don't be put off. IRON MAIDEN seeks to establish "The Book of Souls" as a double-diced epic and they pull it off.

If you will, this album's "El Dorado" or "Bring Your Daughter to the Slaughter" is the debut single "Speed of Light", a lighter fare straight rocker that has a killer piston pop to keep it from being altogether smarmy. Steve Harris' back-and-forth chord hums work in perfect congruence with Nicko McBrain's pounds and cymbal dots while the front line guitars of Adrian Smith, Dave Murray and Janick Gers spool gleefully along the verses, conveying the song's title without going into shred turf. The tradeoff solos are terrific as always and elevate "Speed of Light"'s rock digs right where it should be.

"The Great Unknown" is worked quietly though majestically towards a slower, if crashing apex where Bruce Dickinson raises himself along with the escalating bars. The chord progressions leading to the choruses are prototype, but there's an undeniable soar to "The Great Unknown" where the bridges are given extra attention before delivering high and harmonious payoffs, including a new method to the scheme behind the solo section and a reprise of the suspenseful intro as an elongated fadeout.

The first of the marathon tracks comes with the 13:14 "The Red and the Black", ushered in with dense, acoustic flamenco before the song takes stride. The chuffing riffs are reminiscent of "Rime of the Ancient Mariner" but this time the lead guitar follows in tandem with Bruce Dickinson, almost never leaving in singularity. While everything about "The Red and the Black" has been done before, there's tremendous vigor to it, right down to Dickinson leading the "whoa oh" chants. A pop-flirting, synth-swirling pickup along the journey gives the composition its verve. By now, fans have seen the benefit whenever IRON MAIDEN floats keys into their music and on "The Red and the Black", they're beautifully implemented, since everything else is pushed at full steam, even on the pulled-back progressions.

The 10:28 title track likewise begins with delicate acoustic plucks and reed instruments before punching out some of the album's heaviest riffs and slowest crunches. "The Book of Souls" lumbers like a proud pachyderm, planting each step with a sage superiority in the knowledge anything else will get trampled in its way, yet taking careful gaits not to overstep and ultimately stumble. Again, the synths give "The Book of Souls" added personality and enormous harmonies emerge out of MAIDEN's safety zones. A monster salute to the "Piece of Mind" years is inescapable, but when threaded within such lavish songwriting, it's a wonderful tip of the band's own hats. "Piece of Mind" likewise fuels the raging, bass-hungry "Death or Glory", but there's an updated kick and a swinging beat from Nicko McBrain to make it its own beast, a beast which Bruce Dickinson all but snarls through. While talking about nods to the past, MAIDEN fans will enjoy a chuckle at the hijacking of "Wasted Year"'s core melody which serves up the trad stomper "Shadows of the Valley".

Bruce Dickinson uses a different octave amidst the glorious power ballad "The Man of Sorrows", another track showing MAIDEN willing to try a few new tricks and softer progressions upon its synth whispers and eddying harmonies. Upon arrival of the grand finale, the 18:01 "Empire of the Clouds", one can't imagine the band giving any more than they have already. With piano, violin and cello swimming behind Steve Harris' bass and Nicko McBrain's murmuring cymbal splashes, the suspicion arises that IRON MAIDEN is out to write their singular magnum opus (that already being "Rime of the Ancient Mariner"). "Empire of the Clouds" becomes a mounting neoclassical metal journey with random orchestral florae to marvel at as Murray, Gers and Smith deliver everything in their arsenal upon Steve Harris' esteemed bass bombs the bigger this thing becomes. "Rime" yet remains the quintessential MAIDEN epic; however, "Empire of the Clouds" is the band's most daring composition and worth every single minute as a cinematic-sounding encapsulation of the band's career.

When doing a double album, you'd best come hot all the way or don't come at all. "The Book of Souls" not only comes hot, it can make a metalhead weep with joy a band this long in the game has it within themselves to want to not merely entertain but astonish their audience. IRON MAIDEN is still the greatest, period, the end.