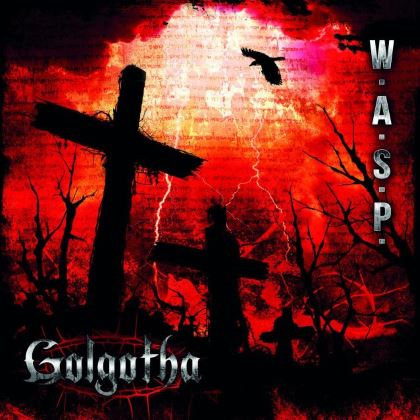 Blackie Lawless has laid low the past six years after gaining momentum for himself and W.A.S.P. with "Babylon" and the nearly iced "Dominator" before it. Lawless suddenly finds himself shy of a drummer as nine-year vet Mike Dupke departs the band prior to the release of the band's newest album, "Golgotha".

Still hanging in camp is longtime bassist Mike Duda and lead guitarist Doug Blair as Blackie and W.A.S.P. spools out another biblical-titled power metal jaunt, this time focusing upon the hallowed grounds where Jesus Christ was crucified. Blackie has reportedly experienced a religious rebirth, considering he vowed four years ago to never again play W.A.S.P.'s signature filth rocker "Animal (Fuck Like a Beast)" live and he's expurgated the bawdier parts of "Chainsaw Charlie (Murders in the Rue Morgue)" onstage.

Whether or not you approve of Lawless' cleanup efforts, "Golgotha" is a vigorous effort with a supposed guidance of the Holy Spirit giving his work more conscience and concentration, if "Eyes of My Maker" is no indication. Imploring "Jesus, I need you now" on the title track, Blackie Lawless is an altogether new man playing the same tricks, this time with huge conviction. "Golgotha" (not wholly a concept album) is no different in structure than any W.A.S.P. album you've heard before, but its girth, maturity and newfound virtue puts it leaps ahead of the band's most recent outings, "The Neon God" couplet notwithstanding.

The opening number "Scream" is a tight W.A.S.P. archetype with a blaring hook, humming bass line and terrific vocals from Blackie, who sounds like he's stored something in reserve during his extensive break. The backing vocals and dropped-in organs gives "Scream" added bulk and Doug Blair screeches and skids his guitar solo with gusto as the song implies sex but with class. Blair is a beast of a different nature altogether on this album, hitting the pinnacle of his powers on the guttural seven-minute ballad "Miss You" and during a fierce progression on the 7:45 epic "Slaves of the New World Order".

As should be expected on any W.A.S.P. album, galloping bass leads the charge on "Last Runaway" (perhaps a nod of sorts to Lita Ford, ex-wife of former guitarist Chris Holmes?),but the bigger part of the story to the song is its grabbing descant and a cheerful, melodic sway by Blackie Lawless, whose singing is bedazzling here. Blackie then toughens his pipes on the equally harmonious "Shotgun", a blaring toe-tapper that rides for more than six minutes and never loses stride.

By this point, what's glaring about "Golgotha" is that W.A.S.P. are in a contented yet muscular verve while doing very little to change the core formula that has hardly deviated since "The Headless Children". This includes "Miss You", where Blackie hits a sage, wrenching depth to his vocals, and the familiar back-and-forth chord bobs sprawling throughout "Fallen Under". As Blackie has famously done over the years, he engineers another WHO-fueled crank-anthem, "Hero of the World".

Again raging at a steed's charge, "Slaves of the New World Order" re-enacts Blackie Lawless' entire playbook, but every lick and every bar is pushed with intensity and a rich projection it's easy to get sucked into it. The biggest deviation on the album comes with the soulful, progressive and Dio-esque "Eyes of My Maker", which will keep any metal fan well-invested in this thing.

"Golgotha" is the same ol' W.A.S.P., but tremendously so. If Blackie Lawless considers himself reborn, then let him be thus; he sounds like he's signing from a metal mountain high.