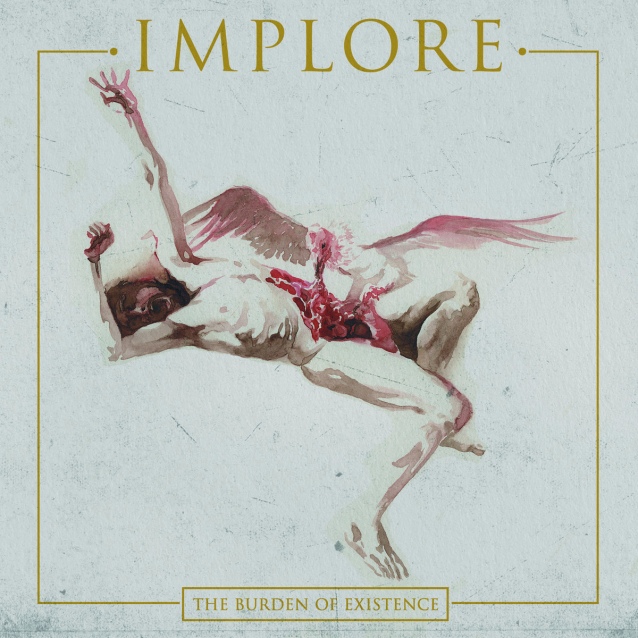 The Burden Of Existence

01. Prior Void
02. The Burden of Existence
03. Archetype
04. Masochistic Tendencies
05. Accept the Loss
06. Sun Deprived
07. Failure Through Self Preservation
08. Ultimate Freedom
09. Love Will Gradually Perish
10. The Sense of Endings

After a decade of grinding against the grain, IMPLORE are well established as one of most furious and distinctive bands around. The Germans' first three albums provide a perfect evolutionary curve. From the all-out deathgrind warfare of 2015's "Depopulation" debut, via the more holistic extremity of Century Media debut "Subjugate" in 2017, and on to 2019's all-encompassing "Alienated Despair", IMPLORE have been resolute square pegs, with an unwritten mission to wring more excitement from such well-worn musical ideas. Furthermore, they have always gone at it with more ferocity than at least 90% of everything else, and so the only concern one might have about "The Burden of Existence" — the band's first for the UK's excellent Church Road Records imprint — is that it might veer too far away from the fast-as-fuck bedrock that fueled its predecessors.

Luckily, there is only good news. Dispensing with the customary atmospheric intro, "Prior Void" allays all fears of compromise within its first 30 seconds. A twisted, SLAYER-tinged nightmare of raging hardcore punk, bone-cracking blastbeats and stuttering breakdowns, it does sound subtly different from the IMPLORE of old, but only in the sense that they have never sounded quite this pissed off before.

The title track is even more hostile: from its churning, atonal opening riffs, which angrily bubble like volcanic sludge, to an askew nod to breakneck post-hardcore that dissolves into deathly slurry, it's both utterly berserk and weirdly accessible. Anyone pining for the short, sharp savagery of old will be more than satisfied with "Archetype", which turns death metal inside out over an unremittingly violent two minutes. Similarly, "Ultimate Freedom" is a brutal blur of hardcore fury and angular VOIVOD-isms; its creators' incensed cynicism dripping from every warped beat and roar. In contrast, recent single "Sun Deprived" blends maniacal speed-punk with the grotesque menace of avant-garde black metal, before climaxing with a jagged, old-school riff of obnoxious enormity. Proving that they can slow the pace without losing a shred of intensity, "Love Will Gradually Perish" is the album's emotional apex. A downbeat, doomy post-punk wall-of-sound, its tone of mute melancholy adds depth and color to an otherwise monochrome tornado of rage.

And again, IMPLORE still sound more militant, more righteously furious and more committed to destruction than most. "The Burden Of Existence" is a smart and inventive piece of work, but its primary purpose is to take people's grinning faces off. We can have both.