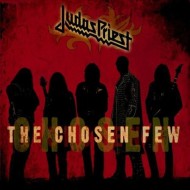 You already know the deal about compilation albums from legendary bands. There are about a billion of them out there; some better than others, but most of which make things like ratings virtually meaningless. That same argument was made in a review of UFO's "Best of a Decade". Much the same can be said about JUDAS PRIEST's "The Chosen Few", except that it does capture nicely a representative retrospective of the band's catalogue up through "Painkiller", certainly in terms of song selection, stylistic variation, and overall flow. Those selections also happen to be chosen by a who's who of rock and metal icons, including members of SLAYER, DEF LEPPARD, QUEENSRŸCHE, WHITESNAKE, METALLICA, SLIPKNOT, BLACK SABBATH, LAMB OF GOD, and many others. KISS' Gene Simmons even gets into the act by way of his succinct tribute to JUDAS PRIEST in the liner notes, which also contain commentary from each musician on his song choice. So blame those folks for the exclusion of tracks like "Heading out to the Highway", "Hell Bent for Leather", "Sinner", "Electric Eye", or "Freewheel Burning". If you're that concerned about it, you can always purchase "Metal Works: 73 - 93", which is quite comprehensive.

"The Chosen Few" captures the various musical periods of JUDAS PRIEST, although it is the more electrifying live versions (from "Unleashed in the East") of early classics "The Ripper" (Ozzy's favorite) and the dynamic "Victim of Changes" (on which James Hetfield comments) that demonstrate the band's far-reaching effect on metal. Similarly, the cover of JOAN BAEZ's "Diamonds and Rust" (studio version included here),which has DEF LEPPARD's Joe Elliott waxing nostalgic, works on multiple levels, not the least of which pertains to how JUDAS PRIEST breathed new life into a song and turned it into its very own classic.

Then you've got '70s examples of a more extreme form of heavy metal that still stand the test of time, namely "Dissident Aggressor" and "Exciter". The former has gotten praise across the metal community with SLAYER being one of the better known bands with a strong cover version. Interestingly enough, it is Geoff Tate and Steve Vai who share their thoughts about "Dissident Aggressor", while ACCEPT points to the track as an example of why JUDAS PRIEST are considered pioneers.

Of course, the other legendary track — in terms of both positive feedback and negative connotations — from "Stained Class" is "Beyond the Reams of Death". It is a song that Lars Ulrich (METALLICA) describes as "the blueprint for the epic rock ballad," but its darkness and indefinable heaviness belies conventional ideas of "rock" and "ballad."

Moving into an era where punch, crunch, and directness defined albums like "Hell Bent for Leather" and "British Steel", the compilation includes the underrated "Delivering the Goods" (Kerry King's pick),"Grinder" (Zakk Wylde's pick),the precision impact of "Breaking the Law" (the pick of MOTÖRHEAD's Lemmy),and JUDAS PRIEST's most known anthem "Living After Midnight", the song that is showered with praise by Alice Cooper and BLACK SABBATH's Geezer Butler. It's not surprising to read that "Rapid Fire" is the choice of PANTERA's Vinnie Paul, given its pure metal power. A brilliantly interpreted cover of FLEETWOOD MAC's "The Green Manalishi (With the Two-Pronged Crown)" from "Hell Bent for Leather" — about which both Randy Blythe (LAMB OF GOD) and David Coverdale (WHITESNAKE) comment — would also become an unlikely heavy metal classic.

"The Chosen Few" mines subsequent albums with "You've Got Another Thing Comin'" (SLIPKNOT's Corey Taylor, SCORPIONS' Klaus Meine),which is nearly equal in status to "Living After Midnight", and the ahead-of-its-time heaviness of "Screaming for Vengeance" (Slash's pick). The choice of "The Sentinel" by FOZZY's Chris Jericho speaks to that cut's continually rising status as a definitive JUDAS PRIEST skull-crusher, a cover of which is also included as a bonus track on MACHINE HEAD's "Unto the Locust". Rounding out the compilation are left-turn track "Turbo Lover" from the polarizing "Turbo", a selection of KORN's Jonathan Davis, and the reinvigorated extremism of "Painkiller", a track chosen by Joe Satriani.

As someone who owns (or has owned) just about every proper studio and live album that JUDAS PRIEST has ever released, I found myself a bit surprised at how much I enjoyed this compilation. Then again, if you're a JUDAS PRIEST fan, particularly the first Halford era, then that's hardly a surprise. Maybe that combined with the track selection and commentary summates the reasoning. But since I've already got all of the tracks, then I'd have no reason to purchase this one unless I just couldn't live without the liner note commentary. As it turns out I can indeed live without it, which is no slam on the interesting and informative content. We've already discussed the deal. If you are new to the band, then "The Chosen Few" would be a good, affordable way to dive headfirst into that vast JUDAS PRIEST ocean. Otherwise, it's a toss-up. We'll call it an 8 for whatever that's worth in this context.