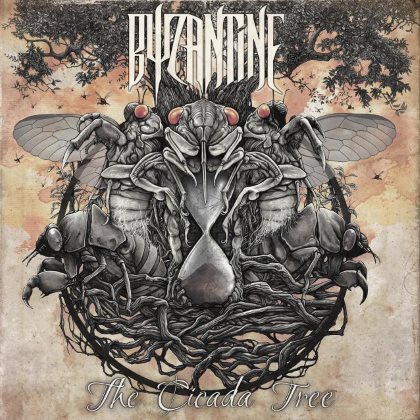 If there's any band in the scene today that deserves some love from the mighty Metal Blade, it's West Virginia's BYZANTINE. Chris"OJ"Ojeda is the last man standing from the band's original lineup. BYZ's members took a hiatus to be regular Joes with regular Joe obligations, right after releasing its 2008 masterpiece, "Oblivion Beckons". It certainly took its toll in the form of diminished lineup and label. However, Ojeda and BYZANTINE kept cracking independently until Metal Blade saw the wisdom to pick the group up.

Difficult to categorize, progression is certainly the definitive tag to affix to BYZANTINE, whether you want to call the band's work proto-prog, agro-prog or progressive thrash. Incorporating elements of every style of metal imaginable, save for maybe black, from the gate BYZANTINE exhibited how evolutionary its music was. The group could even pause from its hyperactive writing scheme to drop tuneful, pounding ditties with monster swing, such as "Kill Chain" from 2004's "The Fundamental Component" and "Jeremiad" from 2005's "...And They Shall Take Up Serpents".

On "The Cicada Tree", Chris Ojeda again teamed up with longtime buddy and BYZANTINE ghostwriter, Jamie P. Rakes. The band allowed fans studio access via random video streaming events, reducing the intensity behind the recording process. If each BYZANTINE album has been one step further than the last with newer influences, newer instrumental trimmings and bolder songwriting, "The Cicada Tree" might be the BYZ's most ear-pleasing slab yet. Nine sparkling, genre bending tracks with a couple of covers at the end—a prog-chopped take on FISHBONE's "Servitude" being far superior to a goofy haul of THE CARS's whack-off classic, "Moving in Stereo".

As with any BYZANTINE release, a speedster lights up this album with "New Ways to Bear Witness". Recent addition Matt Bowles shows he can readily expand Chris Ojeda's thrash zone with explosive double bass and tom cascades. If you're accustomed to BYZANTINE's music, the "New Ways to Bear Witness"'s songwriting is what you'd expect. Sensible moshes and breakdowns drop the velocity to a spot where Ojeda's yelping morphs into comforting rapture, shared vocally with lead guitarist Brian Henderson. "Vile Maxim" thereafter replicates the patterns of the first few BYZANTINE albums. It's a huffing proto puncher, led off by Sean Sydnor's bass blots. "Vile Maxim"'s flow impressively builds steam with a few signature rotations before pummeling its way to close.

"Map of the Creator" and "Dead as Autumn Leaves" are two of the most adventurous songs BYZANTINE has yet executed, both glide peacefully through their respective first few bars, gulped by snarling lifts where the mood changes back-and-forth thereafter. "Map of the Creator" might contain the sedatest tones the BYZ has ever dared, uglying up and swooning in back-and-forth variations. "Dead as Autumn Leaves" doesn't grow quite as weighty as "Map of the Creator", though its proto marched verses give it plenty of meat. If you know "Kill Chain", it's no surprise Chris Ojeda exquisitely pulls off the lilting choruses of "Dead as Autumn Leaves". If you're new to the band, however, it's a nice surprise, along with the tumbling progressions escorting Brian Henderson's sobering guitar solo.

"Trapjaw" couldn't have more fun getting to its thrashing groove, dropping all the riffs and slow-mincing mayhem as can be meticulously assembled until cutting loose. Another daring song is "Incremental", one that Chris Ojeda states was initially a filler cut. The opportunity to dress up what's at heart a breakdown-dragged pumper escalates the song into a classy stream of progressive metal with brainy accents and phantom harmonies.

On the wonderfully constructed title track and the nine minute "Verses of Violence", everything Ojeda and BYZANTINE has stored within its creative nexus comes to elucidate sheer excellence. "Verses of Violence" is a perfect exhibition of how far Chris Ojeda has come since "The Fundamental Component". What was once brute and brash with a mathematician's cheek has matured to a singular body of beyond-metal art, as aggressive and yet sophisticated as anything MASTODON and OPETH have bestowed upon the scene.

The ripping finish to "Verses of Violence" on the heels of such emotive opulence proves why this band matters so damned much. BYZANTINE is an American metal treasure, and thank God they have a home of believers with Metal Blade.