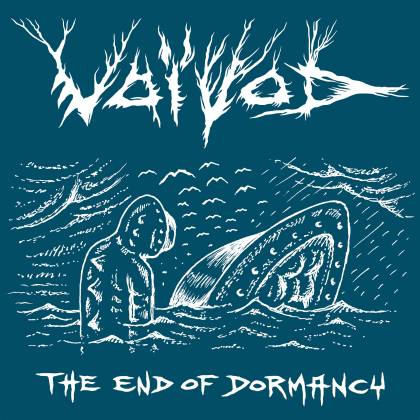 The End Of Dormancy

VOIVOD is quite simply one of a kind. The sci-fi obsessed Canadian band has returned with a three-track, 12-inch vinyl and digital EP titled "The End Of Dormancy", following 2018's Juno Award-winning album "The Wake". The new release is built around a revisioning of "The End Of Dormancy", a song that originally appeared on "The Wake". This "Metal Section" version, the EP's title track, is embellished with trumpets, saxophone and trombones. The EP is rounded out by a live take on this song as well as a performance of the VOIVOD classic "The Unknown Knows", both tracks recorded at the Montreal Jazz Fest in 2019.

While a few songs slapped together on a short album may oftentimes serve as a stop-gap release designed to simply fill in the time between long players, or fulfill contractual obligations, "The End Of Dormancy" is truly an artistic statement. The jazz-fueled take on "The End Of Dormancy" is incredibly dynamic and tasteful. The live version of this track isn't just more of the same. It proves to be an essential aspect to the well-rounded listening experience due to its inclusion of the riveting saxophone solo part. What's more, the EP includes a particularly lively performance of the classic barn-burner "The Unknown Knows", a track that was originally released on the band's pivotal 1989 album "Nothingface".

VOIVOD guitarist Daniel "Chewy" Mongrain, who of course replaced the now deceased, classic VOIVOD axeman Denis "Piggy" D'Amour, has expressed how he feels that the title track inherently entails qualities that are epic and grandiose. With an invitation to play the Montreal International Jazz Festival, Chewy pounced on the opportunity to realize the potential for a more dynamic and almost cinematic revisioning of the song. "I initially wrote the opening riff of the song on tour, outside, behind a club in Germany on a sunny day and recorded right away. It had that quartal harmony over a pedal point that to me evoke soundtracks of classic Roman movies when you hear the brass. It has a military and solemn vibe to it," Chewy said. "It adds that extra empire, military, Roman paddle boat war feel like in the old 'Ben-Hur' movie, with the acceleration of the music and intense and stressful emotions that fits the song lyrics perfectly."

It has been the norm for VOIVOD to take left-field approaches to their art. They continue to follow this path and do so very well. The prog metal giants have taken their interest in jazz to the next level with "The End Of Dormancy". With little surprise, they have done so successfully, as the release is just as bold as it is beautiful.