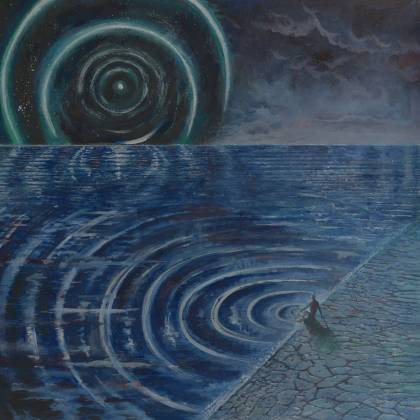 If you blinked, you probably missed it, but the rise and fall of MORBUS CHRON remains one of the most intriguing things to happen in the death metal underground in recent times. Frontman Robert Andersson evidently felt that the Swedes' final album, "Sweven", marked a natural period point in his creative story, and it's a fair point: with as much psychedelic and progressive DNA in its swirling, oddball barrage as it had death metal rudiments, it was a record that threatened to leave many MORBUS CHRON fans confused and spluttering in its bewildering wake.

That said, if you loved MORBUS CHRON's last hurrah, there is every chance you will adore "The Eternal Resonance". While this plainly represents the beginning of a fresh chapter for its chief driving force, there are obvious musical links to the old mothership beyond the new project's name. We are still firmly in warped and grimy underground metal territory, even though there is nothing straightforward or even recognizable about the way SWEVEN approach their metal.

The psychedelic and prog vibes that provided Andersson's old band with such a distinctive, conclusive identity are here in plentiful supply, of course, but here they are the heart, soul and substance of the songs, rather than intuitive detours into the unexpected. And it's plain from the start that SWEVEN are a significantly tighter and more sharply focused beast than their often ragged and riotous predecessor. Opening track, "The Spark", revolves around a simple chord sequence, but it's full of swagger and urgency; an instrumental post-rock scamper that swings beautifully into "By Virtue Of A Promise", the album's first epic. From its wonderfully understated but woozy and somnambulant opening, "By Virtue…" mutates and expands around a doomy core, Andersson's rapacious gargle a gnarly focal point, with pin-sharp dynamics, acres of gothic melancholy and heroic twin-lead hooks, before morphing into something else entirely: a tense, stuttering, stomping post-rock fever dream, chorus pedals set to stun. It's a stunning piece of music, but beyond that it's genuinely thrilling to hear Robert Andersson's musical liberation taking place in real time.

Thereafter, "The Eternal Resonance" continues to dazzle. I could list all the strange and wonderful things that happen during the ornate but winningly organic likes of "The Sole Importance" and "Solemn Retreat", but that would spoil the fun. If it's a distraction from the chaos around us you need, this is as immersive as you could wish for. It's also the sound of an idiosyncratic metal artisan having an insane amount of fun exploring the darkness. We might as well all join in at this point, right?