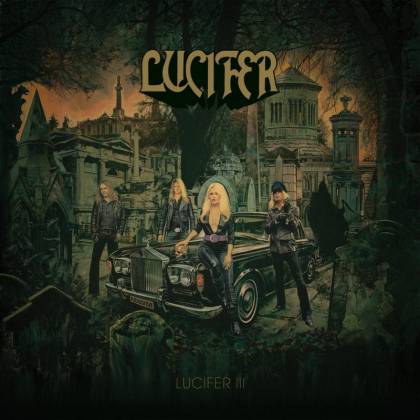 Born from the ashes of the short-lived, awesome band OATH, German vocalist Johanna Sadonis carried that duo's vibrant energy forward into her new project: LUCIFER. She assembled an impressive lineup at that time, then including former CATHEDRAL guitarist Gaz Jennings, for the writing and recording of the debut. Since then, the unit hasn't made any left turns, unleashing music that's suitable for fans of THE DEVIL'S BLOOD and beyond due to the noticeably accessible stylings. They have stayed the course toward traditional heavy metal and hard rock glory. LUCIFER returns at the onset of the new decade with "Lucifer III", an absolute barn burner of an occult rock album from front to back.

LUCIFERVersion: 2020 now finds the German front woman joined by a Swedish cast of characters: guitarists Martin Nordin and Linus Björklund, bassist Harald Göthblad, and none other than Nicke Andersson of ENTOMBED and THE HELLACOPTERS fame on drums. Not surprisingly, Andersson's percussive contribution is adept, tasteful and memorable without being overbearing. Andersson's presence is an obvious focal point, yet it doesn't overshadow the unit's true centerpiece — Johanna Sadonis's beautiful vocals. Her majestic crooning is ripped out of the pages of the playbook of sixties and seventies psychedelic and hard rock, and along with the eerie musicianship accompanying her, LUCIFER sounds like what could be a fitting soundtrack for the classic 1979 flick "Amityville Horror". Appropriate for this kind of energy and essence, legendary horror poster artist Graham Humphreys hand painted "Lucifer III"'s cover.

Sadonis's ethereal and brooding singing catapults the track bearing the band's name into a gothic stratosphere. The vocals and music together somehow usher in a state of calmness that's magnificently and inexplicably almost high energy at the same time. One of the most overtly adrenaline-infused tracks is "Flanked by Snakes", a number that instantly grabs the listener by the throat with an absolutely infectious and glowing hook that sets the tone for what proves to be a riveting track throughout. Sadonis's passions flare with great radiance on "Leather Demon", a track excluding a tremendous sense of mischievousness, defiance and combativeness from the vocalist.

"Lucifer III" isn't anything unexpected. Yet it isn't more of the same. The album is a better filtration of the act's key components. "Lucifer III" is essentially the common ground between fans of JEFFERSON AIRPLANE on one side of the fence and EMPEROR and DEICIDE on the other — highly recommended for all fans of occult rock.