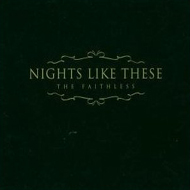 Fucking punishing! NIGHTS LIKE THESE take up the mantle of aggressive, technical, brutal death-inflected hardcore on this debut album, and leave little but rubble in their wake. Wearing their RED CHORD, CONVERGE, THE END and DEADGUY influences on their sleeves, this Tennessee band produce an unholy clatter where head-spinning time changes and face-smashing breakdowns are doled out in equal measure, often at the same time.

Everything about "The Faithless" is engineered for maximum savagery. The vocals are harsh, pained and blood-soaked. The guitars sound like they were recorded too loud, crackling and blaring. There's very little space between the songs, either, so the album's 28 minutes crash over you in a relentless wave. There's a lot going on, musically, but it's all delivered in such a vein-bursting roar that picking out individual moments of creativity will be for later listens. The first couple times through, just plan on being beaten.

Moments of light are few and far between in the muffled torture chamber NIGHTS LIKE THESE have created. There's a little bit of airy melody in "We Were Meant For Ruin" that provides some breathing space, shortly before being crushed down by the squalling dirge "Eternal Tempest". Some of their more rollicking moments could betray a little MASTODON influence, but there's something wholly more oppressive and violent about NIGHTS LIKE THESE — this is a bleak, feral, bilious record, one of the meanest things you'll hear all year.

I'm not sure where these guys will go from here, but they've set the bar damn high for themselves with "The Faithless". Don't miss this album because of the band's dumb name or who released it – this is audio punishment of a particularly virulent variety, the sort of CD where by the time you realize just how musically adept the band really is, your dismembered limbs are already drawing flies in the back shed.