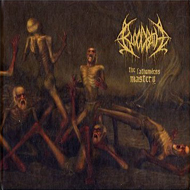 Swedish "superstar" death metallers BLOODBATH have been the critical darlings of extreme metal for quite some time now, even more so since the release of the "Unblessing the Purity" EP and the "The Wacken Carnage" CD/DVD. At least some of that has to do with the now widely accepted role of OPETH's Mikael Åkerfeldt as the "voice" of BLOODBATH, as well as the presence of drummer Martin "Axe" Axenrot (OPETH),and the KATATONIA duo of Anders Nyström and Jonas Renske. Let's face it, these are big names in Swedish metal. But a lot more of it has to do with the fact that BLOODBATH has taken everyone's favorite elements of death metal in general and Swedish death metal in particular, counterweighted brutality with catchy songwriting, and wrapped it all up with a professional recording. Those are exactly the elements that make new full-length release "The Fathomless Mastery" such a successful effort and, yet again, another BLOODBATH album getting a lot of love from the critical peanut gallery.

Much like the real estate agent's mantra of "location, location, location", what makes "The Fathomless Mastery" stand apart from its peers is "songwriting, songwriting, songwriting". Forget about the other qualities for a moment — namely the morbid atmospherics, outstanding guitar work, and all the chop, chunk, and stutter — and focus on the nuts and bolts what makes these songs go. These guys are no dummies; they know what it takes to write a chorus that sticks to the ribs, as well as riffs and grooves guaranteed to keep that head banging for the entire ride. The chorus melodies, no matter how basic, on songs like "Slaughtering the Will to Live", "Treasonous", and "Drink from the cup of Heresy" are low hanging fruit ripe for the picking. Consequently, it takes no time at all to get into the flow of "The Fathomless Mastery" and that's the key, and we're not even addressing the sheer aggression inherent in the band's music. I mean, come on, if you can't groove to "Mock the Cross", which most will recognize as possessing a classic MORBID ANGEL groove, then you're probably not that enamored with death metal in the first place. When Åkerfeldt growls "Mock the fucking cross!" he damn well means it; his odious pipes coupled with these melodies result in a winning combination.

Furthermore, I doubt that the word placement in these titles was coincidental. What the elitists may find cliché and/or juvenile, the unpretentious death metal fan finds as part and parcel to what makes the genre so much fun. Some will argue that the production on this album is too clean for death metal, but examining the issue objectively, the fact of the matter is that sounding good is not a crime. On "The Fathomless Mastery", BLOODBATH has made an album that comes with a lot of meat on the bone. Devour it, savor it, and don't overanalyze it.