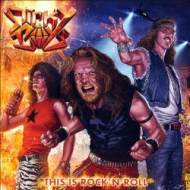 This Is Rock 'n Roll

KROKUS, AIRBOURNE, RHINO BUCKET, STRIPWIRED, ROSE TATTOO, X-SINNER, even THE CULT when they wanna. There's an easy hundred more bands we can cram onto this list and by inference you should be able to detect what they all have in common. Number 108 on the AC/DC replicons list can safely be snagged by French retro rockers STICKY BOYS.

Legend has it NASHVILLE PUSSY and THE DONNAS (both harboring well-known AC/DC affinities) tripped over this shaggy trio while gallivanting overseas and the exposure inadvertently led to the STICKY BOYS' inclusion in an ad for a French national train company. So begins a hopeful career for yet another AC/DC revival act that has more than a handful of competitors to contend with out there, never mind the gazillion tribute acts worldwide.

If there's anything that sticks out on the STICKY BOYS' debut album "This Is Rock 'n Roll", it's their unapologetic volume and their equally unapologetic replication of both the Bon Scott and Brian Johnson eras of AC/DC. Honestly, you'd do better to sit on "Powerage", "High Voltage", "Flick of the Switch" and "Stiff Upper Lip", but what the STICKY BOYS do is inoffensive if you welcome it as a well-versed if overstayed homage.

Expect the same sets of Angus Young riffs and Rudd-wracked beats the real McCoys have dished out ad infinitum themselves. "Rock 'n Roll Nation" and "Bang That Head" could've led off anything AC/DC's done since "For Those About To Rock, We Salute You", albeit the STICKY BOYS only have the fundamentals down pat, first and foremost being decibel decimation.

It's the grit, the grease and suggestive rimjobs that gives AC/DC the dirty verve their audiences glom onto like electric cocaine. Even when the STICKY BOYS try to sleaze things up on "Girls In the City", "Big Thrill" and "Miss Saturday Night", they come off unintentionally innocuous by comparison, and frankly, just as silly as "Bang That Head". For all of their concentration on replicating AC/DC's blazed-up currents, the STICKY BOYS end up playing their game on repeat, much like you-know-who. That's not for everyone, really, but it is going to make plenty of hard rock habitues happier than hitting a Heineken special at Happy Hour.

To the STICKY BOYS' credit, "This Is Rock 'n Roll" is chocked full of energy, if lacking in ingenuity. Of course, ingenuity is the furthest thing from these guys' minds. As a threesome, Alex Kourelis (guitarist/lead vocalist),J.B. Chesnot (bass) and Tom Bullot (drums) create quite a muss and they impressively cover in smaller ranks much of the same ground as AC/DC themselves. "Great Big Dynamite" is like a booming depth charge and it will be sure to get a lot of rockers shaking in their pants. That is, if the STICKY BOYS can draw them away from "Let There Be Rock".