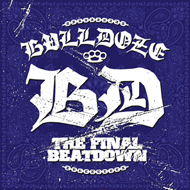 Saying "I guess you had to be there" isn't an insult when it comes to some things. Hardcore bands like BULLDOZE were known as much for their larcenous ways and violent demeanor as they were for their actual musical output, which floated around on a series of scarce 7" singles and imports for most of the band's existence (many of those tracks are compiled here). And if you were there, meaning at various venues in New York state in the early to mid 1990's, you'd be a lot more likely to care about this slow-paced, menacing, thuggish hardcore with its cartoonish and already-dated hip-hop influences and tough-guy lyrics. (Hey, did you know there's supposedly a sub-genre of hardcore called "tough guy", and these guys are its kings? I spent 1993 listening to CORONER and CARCASS, and I somehow avoided having any of these guys forcibly remove me from my lunch money, so I missed that one.)

But while their "straight up old school motherfuckers!" shouts may have aged about as well as the BIOHAZARD discography, there's still something awesome about hearing a band this raw, hopeless, hard-headed and indiscriminately pissed off. BULLDOZE like to play slow, stomping, bone-basic metal, and while it sounds like they're doing it because they probably couldn't steal enough tablature books from Sam Ash to play anything else, they infuse these basement anthems with enough bare-knuckles conviction to turn a skate park full of angry, tattooed, shirtless European dudes into a melee worthy of the evening news. The guitar tone bites and the recording budget probably went to bail someone out of jail, but the desperate low-buck atmosphere only adds to the desired effect, which is kinda like meeting MERAUDER or COLD AS LIFE in the dead end of a Detroit alley and owing someone in the band twenty bucks — you probably aren't gonna die, but you're gonna get hurt.

This is one of those bands you gotta either have gotten into the first time around, at an impressionable age, or one you're willing to approach with plenty of benefit of the doubt. If nothing else, it's nice to hear a hardcore band that actually sounds like a hardcore band — BULLDOZE are all knuckleheaded breakdown, the soundtrack to ill-advised violence and peacock-strutting demands for respect for its own sake, earned with bloody knuckles and broken teeth. To most of you, it'll sound like second-rate HATEBREED (you're wrong, but you're also really not missing much). But the right people will be either impressed with the sincerity and force of BULLDOZE, or at least thankful for the trip down a battle-scarred memory lane.

P.S. Talk about value — not only is there a DVD included with this release, but there's an entire unlisted live show from 1995 at the end of the CD!