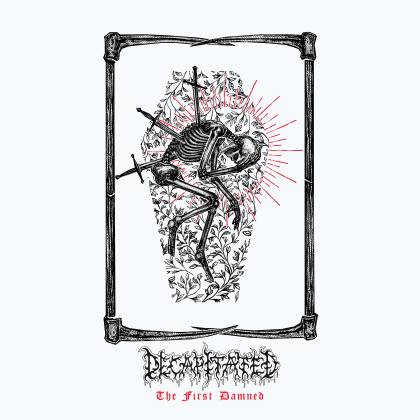 More than any other band, DECAPITATED provided the jolting dose of energy that death metal sorely needed at the beginning of the 21st century. Following in the footsteps of the likes of NILE and HATE ETERNAL, the Poles made the genre vital and creative again, becoming one of its greatest mainstream metal crossover success stories in the process. What more recent converts might not be aware of is how absurdly talented Vogg and his brother, the late, great Vitek, were from the very start. "The First Damned" compiles the two demos DECAPITATED made prior to signing with Earache Records (1997's "Cemeteral Gardens" and 1998's "The Eye of Horus") and the start of their rapid ascent. And while the sonic values on display are a little more primitive than long-term fans will be used to, there is simply no denying that this rips insanely hard from start to finish. Significantly, Vitek was a brain-mangling 12-years-old when some of these songs were recorded. Meanwhile, the obvious and irresistible chemistry between the drummer and his older brother (Vogg was a near-decrepit 15 at the same time) was an unfuckwithable musical backbone.

Eschewing the usual remixing and remastering tactics, Vogg has left the demos in their original state, only making major changes to the artwork, not least because "The First Damned" has never appeared on vinyl before and deserves to look its best. Sonically speaking the likes of "Blessed" and "Way to Salvation" are plainly rougher and rawer than their eventual studio album incarnations, but as is so often the case, the vibe and energy driving these early, aspirational recordings makes its own magic. It's particularly noticeable on "Ereshkigal", one of two songs here that never made the cut for a later album. Infused with the spirit and ragged fury of old-school death metal, but played with the excitable intensity that only adrenalin-fueled teenagers can generate, it's a sublime snapshot of the birth of a genuinely significant and enduring musical force, all powered breathlessly along by a 12-year-old drummer with percussive skills that shamed countless musicians three or four times his age. No wonder Vogg has approached this reissue with such care and respect. This is not just the opening chapter in the story of a death metal band: it's a proud salute to a fallen comrade, and a celebration of the timeless power of fiery and fearless youth.