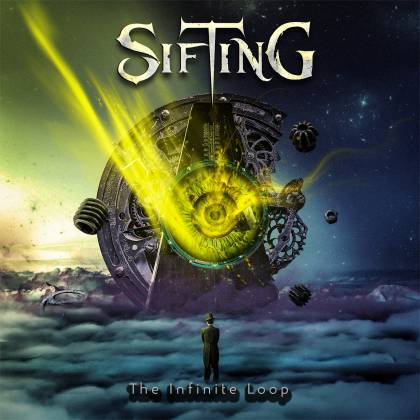 There are few things more thrilling than the sound of a young band with a total disregard for toeing the trendy line. Admittedly, the "prog" tag has been robustly rehabilitated over the last 20 years, but there is still something righteous about the complexity, diversity and sheer craziness that erupts across SIFTING's third record.

In fact, "The Infinite Loop" is not a particularly radical record by modern prog metal standards: fans of DREAM THEATER and BETWEEN THE BURIED AND ME will doubtless recognize and embrace a lot of what the L.A. crew are peddling without hesitation. But while many musicians of their generation stick to the industry-approved script and seem bland and cynical as a result, SIFTING's music is all exuberant intensity, crackling inter-band chemistry and moments of grin-inducing mischief, wherein everything from the leftfield art-metal of LEPROUS to the taut, AOR glow of mid-'80s DOKKEN gets a look-in. Deeply in love with the idea that progressive metal is all about boundless possibilities and the skewing of cherished tropes, they cram in such a ludicrous number of musical ideas during these 71 minutes that you may begin to wonder if they couldn't have squeezed a couple of albums out of it all. But then, of course, that wouldn't be very prog, would it?

If you are sensible enough to regard BETWEEN THE BURIED AND ME's "Coma Ecliptic" as a recent high point for this kind of metallic exploration, "The Infinite Loop" will scratch that same scattershot itch. Book-ended by two gargantuan epics — the opening "Agony", the closing title track — and shrewdly paced throughout, it's plainly constructed to be consumed in one, gluttonous sitting and flows beautifully. "Agony" is a perfect starting point, with its bombastic, imposing prog metal overture and swift switch to full on turbo-thrash mode. When frontman Eduardo "Edu" Gil emerges from the blustery throng, his faintly theatrical tenor immediately adds a zing of humanity, as the song spirals and shifts through all the gears, with at least two perfectly serviceable killer choruses and enough dazzling lead work to keep shred-nerds in a state of melted-fret euphoria. The album's two preview singles, "Stop Calling Me Liberty" and "A Critical Affair", present a more succinct but no less inventive vision, permanently focused on soaring melodies and chordal melodrama, but firmly entrenched in brutish metal territory, too. SIFTING wear their technical mastery lightly: guitarists Gil and Xavi Leon make no attempt to out-Petrucci the competition here, but their brilliance is obvious; their shared knack for understatement, an added bonus.

Elsewhere, the brooding but explosive "Ghost Of A Lie" boasts a dizzying cameo from Derek Sherinian and "Emotionless Shells" goes balls-out and heads down, like SYMPHONY X after a Twinkie binge, but it's the 13-minute gauntlet-toss of "The Infinite Loop" itself that provides the victorious sheen on an absurdly assured third effort. A sumptuous and elegant mini-symphony with a macabre, melodramatic undertow, it seems to owe a greater debt to the flowery, opulent Italian prog rock of the '70s than to anything post-FATES WARNING. It's a stunning climax to an album that prizes tunes over tech and enrichment over commerce. More bands like SIFTING, please. "The Infinite Loop" is a breath of wonderfully cool, uncool air.