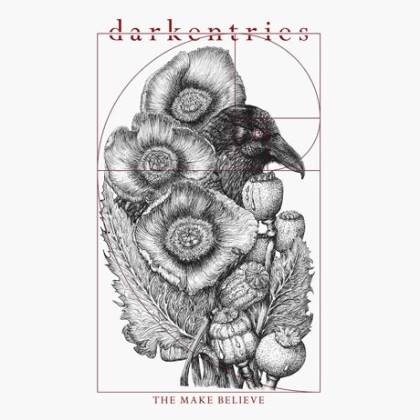 This five piece angst sludge band from South Carolina have been together under the name DARKENTRIES since 2012, but the components were friends long beforehand. Their familiarity with one another was pushed to the nth by reportedly living in the same house together and slogging through the night on many occasions to produce their debut offering for Phillip Cope and Laura Pleasants' Retro Futurist label, "The Make Believe".

Having already churned out a demo and bedroom-generated singles to begin assembling their distortion-dependent tones, DARKENTRIES captures the inherent moodiness of the BAUHAUS song bearing the same name, but sound-wise, it's a different story. These guys embrace a chaotic blend of oozing sludge tones, post metal surrealism and random breakaway sections treading toward the blackened throes of Hell. If there's one best way to summarize DARKENTIRES, it would be through the title of the fifth song on "The Make Believe", "Feedback Funeral".

Despite the manifesting blitz-grind rolls on "I'm Tired of Being Awake", "1200-S" and "Feedback Funeral", the primary tempo of this five-song album is set upon a stubborn lag. "The Make Believe" might very well be the product of five dudes on sleep deprivation and slaves to their art, since the dominant drag of this album sounds like a boiled-over vent session. Not a bad way to tap into a core anger behind music that's ugly by nature, even with the calm opening to the stamped down bombast of "T.V. Fuzz". If only these guys had been alive to witness the days of UHF and VHF when television did indeed become a tundra of broadcast snow after late night signoffs. DARKENTRIES has the right idea by summoning a pissed-off auditory crush bred by the frustrations of insomniacs and night owls, which likely also serves as the inspiration to "I'm Tired of Being Awake", even if the latter song carries much deeper insinuations of demise.

What DARKENTRIES possesses is an astute, if still nurturing, interpretation of NEUROSIS, ROSETTA and BALBOA with the occasional haunt of black metal in spots. "I'm Tired of Being Awake" is DARKENTRIES' best-realized marriage of their influences and not just because it carries a sense of urgency beyond the other four tracks. The fast-plugging bass lines and all-over-the-place drums forces the rest of the band to hit the same caffeine bomb and give frenetic chase. What's great about "I'm Tired of Being Awake" is how it suddenly crashes to a quietus after spiking on its speed hit.

The changeup in vocals from screech to low-end zombie droll on "Honey Eater" is haunting and you can expect it to re-emerge on "1200-S", (which may or may not have something to do with the Ducati Monster motorcycle) perhaps the most unsettling track on "The Make Believe". "1200-S" yields some of the most fearsome chords in DARKENTRIES' still-developing arsenal and they build the song to a blossoming catharsis of sonic stateliness. Then the KYLESA-kissed sweaty aggravation through the first half of "Feedback Funeral" shows why Retro Futurist laid out the welcome mat for these guys.

There's not much DARKENTRIES needs to do to improve themselves, other than tighten up a little. The passion is there, the strategies in this camp are smart and they're obviously not afraid to push their personal wherewithal in the name of art. If a fragmented mirror could sound off, it would probably ring like "The Make Believe".