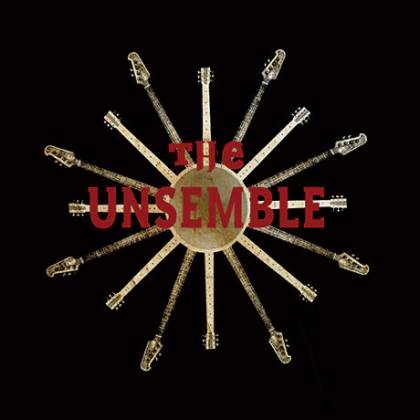 Duane Denison is one busy dude. Recently hitching back up with the reformed JESUS LIZARD, Denison is also an active guitarist with TOMAHAWK and TH' LEGENDARY SHACK SHAKERS along with his external project alongside former MINISTRY figurehead, Paul Barker, U.S.S.A.

Now comes THE UNSEMBLE, a trio featuring Denison together with drummer/keyboardist Brian Kotzur from SILVER JEWS and EINSTURZENDE NEUBATEN's Alexander Hacke (bass/electronics). If TOMAHAWK's recent album "Oddfellows" was an appropriate title for that Mike Patton-led troupe, then THE UNSEMBLE might as well be the kindred cousin "Weirdfellows". Before you even slide on THE UNSEMBLE's self-titled debut, you'll be greeted with sculptures of animals using instruments. Inventive and fun, but absolutely batty, and it's well-indicative of the sounds you'll encounter with these guys.

As if vying to score a yet-to-be-filmed dark comedy or cult-minded sci-fi flick, THE UNSEMBLE hits their listeners with quirky instrumentals heaped with plenty of varying aesthetics, if no real set course. Brian Kotzur is a film scorer on the side, and his creative input is well-felt here. This is an album you likely won't "get" upon the first listen, since Duane Denison and his partners often leave their listeners sitting in the creepiest places (usually on the five "Improv" tracks) before opening the doors to unexpected porticos filled with twittering vibrancy, free-floating space-outs and the occasional pleasure groove.

Brian Kotzur often taps out hollow beats like teasing specters on the "Improv" segments, which allows Duane Denison to gently weave reverberating echoes that heighten the implied paranoia of these jittery, psyched-out sequences. On the fifth "Improv", both Denison and Hacke increase their supplications where a gory nervous breakdown spews. The second "Improv" is carried more on an unnerving buzz of amp feedback, then eventually quick-stamping tempos introducing some scary string tweaks and bass bombs. Denison replicates koto twang with his guitar on the third "Improv", another cool twist.

The translucent synth swirls of "Wave" is like the guys were capturing an acid-assisted viewing session of "Barbarella". Early on in the album, the ethereal keys and cymbal clapping of "Krishna", followed by the trippy synths hovering over the rolling bass of "Circles", establishes THE UNSEMBLE's daze-heavy prospectus. "Act 3" is perhaps the most agitated this album gets on the heels of Alexander Hacke's rapid-moving bass lines and Brian Kotzur's step-jive slide. Still, Duane Denison keeps a hazy churn overtop "Act 3" that spills into the lumbering drag of "Chaingang". The latter song feels as sweaty and oppressive as its namesake with Kotzur rolling out laborious strikes (think of the ship galley drummer in "Ben Hur") and Denison veritably representing the sun's body-draining rays.

Ironically, "Cyclone" is hardly a speed demon. It's quite the opposite, carrying a subdued, hangdog shuffle with an appositely pretty and swooning freestyle by Denison. It is more like the remorseful aftereffects of a tornado touchdown. "Neon" beforehand is one of the more exciting interludes of the album, bred out of horror scores of yesteryear and adversely creating an empathetic sway instead of the internal fear cast by the "Improv" tracks. "Shadows" (featuring added guitars by Dallas Thomas) is the grooviest cut on the album, with a gnarling bass plod and killer sub-melodies that collectively captures downwind wafts from "The Twilight Zone" music and re-interprets them impressively.

Hang with this one through a couple rides. THE UNSEMBLE is hardly an instant grab, but after a while, their compositions become more affecting, if incredibly nuts by their random character.