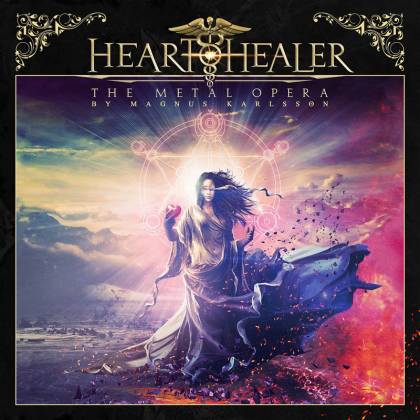 The Metal Opera By Magnus Karlsson

Barely nine months after the release of last year's magnificent "We Are The Night", relentless workaholic Magnus Karlsson has conjured yet another gloriously overblown celebration of metal and melody. This time around it's a full-blown concept album, replete with multiple vocalists playing an assortment of roles, but the essence of the Swede's eminently classy take on prog, power and symphonic metal remains the same. HEART HEALER is/are all about big, bombastic and fervently glossy heavy metal, but delivered with such breathless conviction that the only sane response is to sit back and soak up the remorseless barrage of sugary pomp. This stuff will clog your arteries, but what a way to die.

Clearly a man with impeccable taste, Karlsson has made the shrewd decision to give this record's starring role of The Heart Healer to Adrienne Cowan, best known as vocalist with SEVEN SPIRES and a member of WINDS OF PLAGUE, but also one of the most versatile and charismatic singers in metal today. From opener "Awake" onwards, Cowan wrings every last drop of drama and excitement from Karlsson's songs, scales the octaves with unnerving skill and seems to flourish even more when paired with some of the record's other notables. In particular, the moment when Cowan sings a duet with BATTLE BEAST's Noora Louhimo is genuinely startling: a masterclass from both women, but also a wonderfully harmonious blending of voices. Similarly, when Annette Olzon (THE DARK ELEMENT/ex-NIGHTWISH) teams up with Cowan for "Who Can Stand All Alone", it's a match made in pop-metal heaven. Everything Karlsson writes is insanely catchy, but it's the inspired weaving of seemingly incompatible voices that really hits home here.

Musically speaking, "The Metal Opera" offers little in the way of surprises or curveballs, but the sheer power of the melodies renders such concerns redundant. There are a few moments when Karlsson seems to stretch out and indulge himself a little more: "Into The Unknown" is a particularly sumptuous feast of dynamics and melodrama, with another astonishing vocal from Louhimo, and "Weaker" is a pitch-black power ballad to savor andCowan's finest performance of the lot.

To bring things to a suitably roof-raising close, all seven vocalists collide for "This Is Not The End", and it really does feel like the grand climax to some wild, state-of-the-art exercise in heavy metal musical theater. Of course, if the idea of musical theater fills you with dread — and, if I'm honest, I'm with you on that — "The Metal Opera" works equally well as a straightforward collection of songs, all beautifully sung and performed with immaculate, virtuoso precision. A class act, basically.