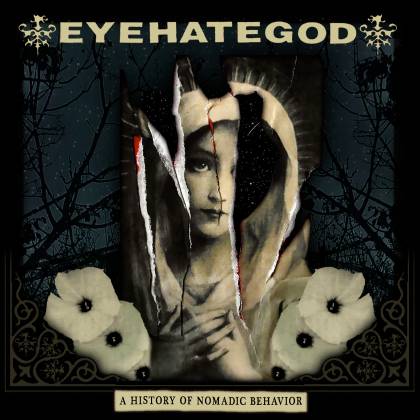 A History Of Nomadic Behavior

It wasn't long ago that PANTERA's Phil Anselmo and LAMB OF GOD's Randy Blythe both filled in live on vocals for the notorious New Orleans crew EYEHATEGOD. That's because their front man was out of action due to serious health issues. Five years have passed since Mike IX Williams successfully pulled through a liver transplant surgery. Hard and wild living has its consequences, but EYEHATEGOD's infamous vocalist jumped back on the frontlines soon thereafter, as the band embarked upon a hefty three-year touring cycle that found them staining various parts of the globe with their filthy sludge.

Then, of course, the world came to a halt due to the ravaging pandemic. But there's no rest for the wicked. The band already had music in tow, so Williams travelled to Chicago, layering his potent tales upon the band's unique hybrid of eighties hardcore stomp that's crossbred with SABBATH's doom and gloom and soaked in blues, whiskey and absolute misery. The resulting musical vomit is encompassed within "A History of Nomadic Behavior", the act's first album since 2014's self-titled effort, and just their sixth album in the band's 33-year-long history. "A History of Nomadic Behavior" offers everything that longtime fans would want and expect, but it isn't just more of the same. The songwriting has improved, and there is much more depth and dynamics at hand.

The squealing feedback, grit and coarse nature that defines EYEHATEGOD's music remains, yet the band is noticeably more exploratory, relatively speaking, with stuttered tempos and an increased use of melody. These elements are employed right off the bat, in fact, with opening number "Built Beneath the Lies". "High Risk Trigger" is one of the catchiest songs the band has written to date. It's steeped in a SABBATH-ian groove and filtered through the swampy Southern style so inherent at the band's core. While lyrical abstraction drives the song, it addresses topical and ubiquitous issues that are consuming the nation, including both the pandemic and civil unrest. "Infection is the way, disruptive crowd takes aim," Williams spews forth, and elsewhere, "Burn down the rail yard house, destroy the USA."

"Smoker's Place" is a minute-long, calming and sedative instrumental that reflects New Orleans's blues and jazz obsession. That blues and jazz quality is also a key facet of the mighty BLACK SABBATH that's actually lost upon most SABBATH-worshiping bands, including SLEEP, who only focus upon the monstrous doom riffs. Indeed, EYEHATEGOD has never been this diverse in its expression. Yet the vitriol and scathing hatred are still present, as we would expect. It's hard to believe that these maniacs are still at it. And as "A History of Nomadic Behavior" proves, it doesn't sound like they're going to run out of ideas any time soon: EYEHATEGOD is back in a big way.