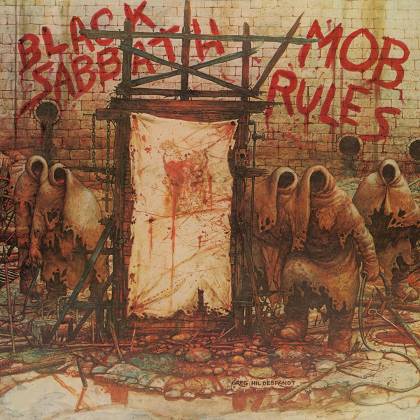 Ronnie James Dio's introduction into the BLACK SABBATH fold provided a much-needed infusion of fire on 1980's "Heaven and Hell". The group was re-energized, and that record's reception and subsequent touring cycle revived the vaunted icons as a heavy metal force. The group did not manage to avoid internal drama however, as drummer Bill Ward departed after an early tour stop. Vinnie Appice filled in the vacant drum seat and would stay with the band into the recording of their follow-up record, 1981's "The Mob Rules". While the prior record's surprise factor was gone, high expectations were mostly met with the proceeding slab of soon-to-be fan-favorite tracks. As with "Heaven and Hell", Rhino Records has issued a Deluxe Edition reissue of "The Mob Rules", with a new remaster and plenty of bonus tracks, though here they go above and beyond by gifting fans with a previously unreleased full performance from the band's 1982 world tour.

Once again, longtime fans that have spent multiple listening sessions with "The Mob Rules" won't find too much new to dig into with the core record. As with "Heaven and Hell", Tony Iommi's guitars and Geezer Butler's bass do feel slightly warmer in the mix, but aside from that, it's the favorites that you've known and loved for four decades. Much like the prior record, everything starts off with a hard-driving ripper, as Dio is out in full force on "Turn Up The Night" to lead off another series of powerful vocal performances. The album then veers off into boogie-trudge with "Voodoo", which retains an aura of heavy metal thunder thanks to Dio's command of the chorus, and Iommi experimenting a bit more with some blisteringly discordant guitar solos. Iommi's guitar work is especially of note on this record, as one can't help but wonder if he had been absorbing some of the popular rock acts of the time period, such as VAN HALEN, and figuring out his own spin on the then-current evolution. Those moments of contemporary rock are woven tastefully into the band's established blueprint, but lest any listeners were getting concerned that BLACK SABBATH might be leaning too heavily into fast-paced rock, the slow-burning doom comes roaring back with "Sign Of The Southern Cross", bolstered by what may be Dio's finest performance of his original run with the band. The remainder of the album doesn't quite match the highs of the first few tracks, aside from the title track, though the band still has plenty of fuel left on "Slipping Away"'s radio-rock jam and the ballad-turned-rocker of "Falling Off The Edge Of The World".

The real joy of Rhino's new reissue of this record though — and what really earns the rating attached to this review — is the extras that fill out this release. Though as with "Heaven And Hell", Rhino does make the curious decision of including some previously available tracks from their earlier "Live At Hammersmith Odeon" release. However, on "The Mob Rules" Deluxe Edition we are also gifted with an unearthed full, live performance from a 1982 tour stop at the Portland Memorial Coliseum. Aside from some sound issues on the set-opening "Neon Knights", the full set ends up being an even better showcase of this lineup's live prowess than the Hammersmith Odeon issue, and blows away the muddy mess of 1982's "Live Evil". On this particular night Dio has an extra snarl in his voice, most notably on an extended performance of "Heaven And Hell" and "Sign Of The Southern Cross". Songs from the Ozzy Osbourne-era of BLACK SABBATH will always sound slightly off with anyone else singing them, but Dio's renditions here are the best to be found on any official issues. Iommi and Butler have a loose energy that also helps make this a fun set to take in, and Appice gets plenty of moments behind the drum kit to shine in a way that fills out the long-favored classics and makes them sound more belonging to this era of the band. Additional keyboards by Geoff Nicholls are mixed higher here than on the band's other live issues, which also lends an interesting twist to some of the older songs in the band's catalog.

"The Mob Rules" would be the final studio documentation of this era of BLACK SABBATH. But the songs on display both on the studio record and the extras here show off a lineup that dissipated while still very much at peak power, and Rhino's inclusion of a previously unavailable live performance showing that power makes this a must-purchase, even if you already have multiple editions of this record.