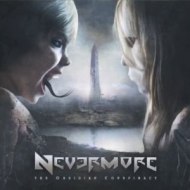 01. The Termination Proclamation
02. Your Poison Throne
03. Moonrise (Through Mirrors of Death)
04. And the Maiden Spoke
05. Emptiness Unobstructed
06. The Blue Marble and the New Soul
07. Without Morals
08. The Day You Built the Wall
09. She Comes In Colors
10. The Obsidian Conspiracy

"The Obsidian Conspiracy" is not "This Godless Endeavor". Few albums are. It is however another mighty release from the Seattle stalwarts. Again demonstrative of their unique crossing of thick 'n blistering power thrash and dark melody, the new album offers fans plenty of the familiar with a smattering of expansiveness.

The most notable aspect of the group's seventh full length release is a much more concise method of composition. Most songs are in the four-minute range — only the closing two exceed five minutes and opener "The Termination Proclamation" is just over three — and offer an immediacy that was previously uncharacteristic of the band's recordings. That is not to say that the material is one-listen candy for the ears, but it does tend toward a relatively more accessible sound, at least compared to the dense layers of past works. Opener "The Termination Proclamation", is a definitive example and reminiscent of 2000's "Dead Heart in a Dead World", while the melodic factor is boosted to a new level on tracks such as "Without Morals" and "Emptiness Unobstructed".

A handful of songs, in whole and in part, are demonstrative of those aforementioned expansive qualities. A ballad-esque track called "The Blue Marble and the New Soul" with its chilling piano is a beautiful standout. The acoustic, though still ominous, passages of "She Comes in Colors" and the comparatively heavier "The Day you Built the Wall" offer a stunning contrast as well. In both cases, rays of light are conspicuously absent. Let's face it; the one certainty is that Warrel Dane's lyrics will never be recommended as an uplifting cure for dreary days of rain.

Much of the remainder of "The Obsidian Conspiracy" is pure aggressive NEVERMORE with those always monstrous riffs and the outstanding, passionately performed, guitar solos of Jeff Loomis, the closing title track in particular a metallic beast of gargantuan proportions. "The Obsidian Conspiracy" may not be mentioned in the same breath as albums like "This Godless Endeavour", "Dreaming Neon Black", or "Dead Heart in a Dead World", but it is further proof of NEVERMORE's inability to manufacture an inferior product.