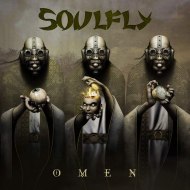 Those of you that have been paying attention lately have noticed that Max Cavalera has been on quite the roll lately. Since reclaiming his roots on the thrashfest that was "Dark Ages", Cavalera seems to have really re-embraced the violent side of his musical heritage. Along with "Dark Ages", its follow-up "Conquer" and his reunion with his brother Igor for the punk-fueled CAVALERA CONSPIRACY album "Inflikted" are arguably the heaviest Cavalera-penned releases we've heard since the glory days of SEPULTURA. Thank the metal gods for consistency as the newest SOULFLY drop, "Omen" sticks faithfully with the current trend.

As expected with any SOULFLY release, "Omen" carries a common bond with everyone of its precursors in that we're treated to Max's trademark gruff bark and straightforward (and often repetitious) style of riffing. In other words, if you're a SOULFLY fan, there's plenty here to go nuts over. If not, I doubt "Omen" would do nearly as much as "Dark Ages" to change your mind. The absolutely explosive opener "Bloodbath And Beyond" immediately grabs your attention with a relentless punk/thrash attack. One of the album's two guest spots (save for Max's sons who appear on covers of LED ZEP's "Four Sticks" and EXCEL's "My Life, Your Life" on the bonus addition) comes from THE DILLINGER ESCAPE PLAN vocalist Greg Puciato. The track, "Rise Of The Fallen", while reserved, does step outside of the box a bit with the typical SOULFLY bulldozer groove flavored with some cool cyber-sounding licks courtesy of guitarist Marc Rizzo and a touch of sitar that leads into a plodding death metal-esque section. Surprisingly, Puciato's agonized voice fits quite well alongside that of Cavalera's. Tommy Victor (PRONG, DANZIG) lends his guitar talents to "Lethal Injection"; a tune that could have easily come from PRONG's back catalog.

Overall, "Omen" is the aggressive, go-for-the-throat side of SOULFLY on a rampage. While there's not a lot we haven't heard from the band going on here, the disc is not without its golden moments. The interplay between Cavalera and Rizzo (who once again provides plenty of impressive examples of lead work) during the mid-paced "Kingdom" adds a nice twist to the SOULFLY norm. Nothing fancy, but it works well; a statement which could summarize "Omen" as a whole. Tracks like "Jeffrey Dahmer", "Vulture Culture" and "Off With Their Heads" are fairly straightforward in delivery and repetitive in nature. They definitely won't be going down as the most memorable tunes Max has ever written, but they do well to get the blood flowing. Despite a hit and miss mid-section, "Omen" ends on a strong note with "Mega-Doom", which adds an air of moodiness to the mix without sacrificing the any of the aggression offered by the tracks that surround it and "Counter Sabotage"; a song that the unbridled angst of the album's first song, while adding fistfuls of groove and guitar pyrotechnics. Of course, what is a SOULFLY record without another addition to eponymously-titled instrumental to close the show. This time out, Rizzo taps into the soul of Andy Summers (THE POLICE) for a pleasant foray into the world of mellow jazz. A nice calm after the storm.

Say what you will about SOULFLY, but Max and Co. have always been able to produce quality material; even if his vision has changed more than the band's overall sound. "Omen" won't go down into the annals of history as his best effort, but I will rank it among his hardest-hitting. Admittedly, I do kind of miss the ethnic/world beat element we've heard in the past, but the fist-pumping rage-aholic in me dug the shit out of the no-frills, destruction-minded approach taken on "Omen". Slice it up as you like; "Omen" is bound to leave a trail of broken and bruised bodies in its wake.