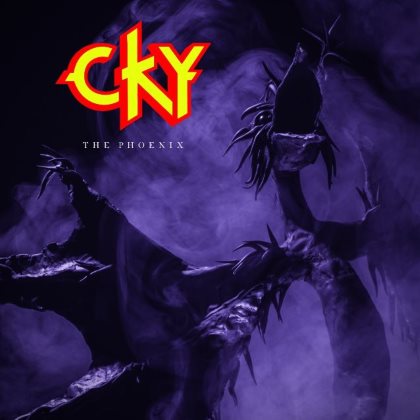 It's been eight years since "Carver City", and for those who have long gnashed upon their nubby fingernails waiting to see what the fallout in Camp Kill Yourself hath wrought, the moment is finally here. No, the separation from Deron Miller wasn't pretty by any means, and many wrote the band off immediately thereafter. As much as "Carver City" tried to raise CKY to a more prominent stature as fuzz artisans, the strain was noticeable. That album was achieved, certainly, but it's no surprise the band fell apart. With an appropriate title implying resurrection, "The Phoenix" distances itself as far from its predecessor as Miller to his former bandmates, Chad I Ginsburg, Jess Margera and Matt Deis, the latter picked up from ALL THAT REMAINS in 2005.

One might call the unfortunate split a necessary evil, since "The Phoenix" is a fuzz-bombed, funk-fried rebirth of ballsy modes hinted at as far back as "Inflitrate * Destroy * Rebuild". Sojourning to the desert at Rancho de la Luna in Joshua Tree, California to reboot and revitalize, Ginsburg, Margera and Deis get their funk freak on. The group relishes in the wafting sonic dandruff left behind by QUEENS OF THE STONE AGE, FU MANCHU and Mark Lanegan. Skate punks of yesteryear may blow a raspberry at the new CKY, which sees Chad I Ginsburg assuming vocal duties on top of guitar, but his transition is a successful one. And "The Phoenix", goddamn it, is fun.

What's cooler about the opening cut, "Replaceable": Jess Margera's slick, whumping tempo with his cymbals and hi-hats dancing as much as his snare strikes, the omnipresent wah, Matt Deis's globby bass or the goofy creepiness lurking behind it all? You won't have too much time to contemplate this once "Days of Self Destruction" launches behind it. Its ear-tickling riffs, proto-funk shakes and Chad I Ginsburg's zippy guitar solos—his vocals have equal pep, for the record—wonderfully take the track to close.

If there was something grossly missing on "Carver City", it's the sense of joy in rocking out that CKY brings back to these two tracks and the groove-heavy, funk-raked "Unknown Enemy". Seriously, the difference is as barefaced as it is infectious. This stuff is far easier to play with, like unearthing a banished toy once the shock of growing up wears off and base pleasures are permitted once again. "Unknown Enemy" is such a toy. It sounds like it came out of the proverbial cardboard box from the attic, shaking off its mold with liberated glee for another chance to please.

"Head for a Breakdown" is a tad heavier in tone and mood, but the clomping rhythm and buzzing guitars and keys keep the song from growing maudlin. Some might draw parallels to the THE BLACK KEYS's ticklish choruses, but CKY had already beaten the garage rock revival hipsters to the punch long beforehand, if only in fleeting doses trying to find its identity between punk and metal.

"The Other Ones" is awesomely dweeby with its step-heavy nod to post-WestboundFUNKADELIC, and CKY plays it as if caught in the scrutinizing view from George Clinton's cooler-than-you specs. In such minimal if critical space, the funk, the whole funk and nothing but the funk is permitted. It's a cardinal rule CKY not only observes, but plays like Clinton is the group's one-man jury. In three minutes, "The Other Ones" becomes a wild and nappy number, much as the bass-bombed, beat crushing "Wiping Off the Dead" thereafter becomes a deafening pleasure pill.

Faster than you can sneeze the choruses of "Lies From You", "The Phoenix" is over as quickly as it began. The best albums are the ones that not only make you move, but more importantly, they get in and get out—leaving you wanting more. Whatever CKY was looking for with "Carver City", the group wisely abandoned that hope and got back to what's real, which is entertaining instead of challenging fans. "Better Than Get Even" may be the longest running track yielding the most progressions, but it doesn't forget to rock and shake as hard as "Replaceable" and everything between. "The Phoenix" is wonderfully weird, gloriously geeky, and it rocks like the party at Camp Kill Yourself was yesterday, catapulted forward in a hurry.