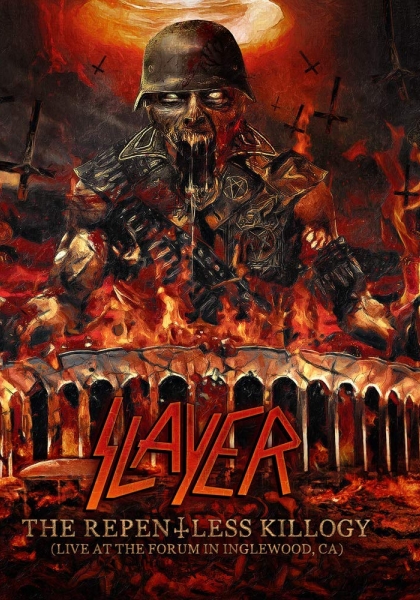 It is fitting that the last music product released before SLAYER's final live shows is a document of the band's previous show at the same venue, the historic Forum in Inglewood, California, just outside of Los Angeles city limits. The vaunted violence of vintage SLAYER mosh pits has slightly calmed as the band has gotten older, but the group's status as hometown heroes still lends an aura of cathartic chaos to their local shows. "The Repentless Killogy" Blu-Ray release pairs a Forum concert from August 2017 with a blood-splattered short film that further expands upon narrative stories told during music videos released in the wake of their last studio album, 2015's "Repentless".

METALLICA released the live concert/narrative film hybrid "Through The Never" in 2013. It received mixed reviews, in part due to its awkward wedding of the concert footage within the narrative story. On "The Repentless Killogy", the program begins with the 40-minute short feature before segueing into the full concert, which remains uninterrupted throughout. The narrative portion wraps the original music videos for "You Against You", "Repentless", and "Pride in Prejudice" with an opening narration and a continuation of the story of Wyatt (Jason Trost),an eyepatch-wearing bringer of violence seeking revenge against nefarious characters who have wronged him, culminating in a bloody climax during SLAYER's performance of "Angel of Death". The full film, written and directed by BJ McDonnell and featuring appearances from genre film favorites such as Danny Trejo ("Machete") and Bill Mosely ("The Devil's Rejects"),is a gory tale coated with plenty of red viscous fluid to please those whose streaming preferences lead more towards Shudder than Netflix. The conclusion of the story isn't fully satisfying on a narrative level, but McDonnell's prior experience as director of 2013's "Hatchet III" and his dozens of camera operator credits on major films and television productions give a strong sense of direction and space to the shoot outs, prison riots, throat slashing, decapitations and disembowelment that happen along the way.

There are not too many surprises to be found in the concert portion of the film that fills out the rest of the disc. This specific show — also released as a stand-alone vinyl/CD release — was another night on SLAYER's 2017 "Repentless" tour. There are a few songs from the album of the same name, but otherwise, it's a fairly standard SLAYER set list. If there was not a camera crew present or a bit of extra pyrotechnic flair added to the band's stage dressing on this evening, no one in attendance would have guessed this would be a future feature release. The band's performance though is strong and incredibly tight, with Tom Araya holding court with vocal screams that are still blood-curdling to this day.

The concert portion of the film is helmed by veteran music video director Wayne Isham (METALLICA's "Enter Sandman"). The presentation is somewhat generic, though the use of frenetic camera movements and cuts — with plenty of spotlight given to the band's rabid hometown crowd tearing up the floor — adds a dizzying level of visual energy to match the ferocity of the band's well-aging fan favorites, such as "War Ensemble" and "Hell Awaits". The editing can be a bit overwhelming at times. The extra level of pyrotechnic stage production came off incredibly impressive while in attendance at the show, but on the final film, often gets diminished by camera cuts mid-explosion. Thankfully the camera slows down for fans to gaze in awe when Kerry King and Gary Holt unleash the guitar solos that have made SLAYER fans obsessed for the last thirty-five years.

It is bittersweet to see a SLAYER stage and not see Jeff Hanneman and Dave Lombardo up there playing the anthems they helped craft for a generation of heavy metal fans. However, "The Repentless Killogy" shows that the current lineup of the band still brings plenty of spark and fury to those anthems, with the opening short film satiating bloodlust for those who are nostalgic for the more violent moments of SLAYER mosh pits from yesteryear.