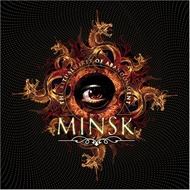 The Ritual Fires of Abandonment

How does on follow up a seemingly one-of-a-kind album like MINSK's "Out of a Center Which is Neither Dead Nor Alive" (on At a Loss Recordings) that is more an organic mass of ethereal sound dynamics and overwhelming heaviness than an album consisting of six distinct tracks? If you are bassist/vocalist and producer Sanford Parker you create a second equally compelling product that stays the course, yet paints with finer strokes, adding more diversity to the eclectic mix. The album is "The Ritual Fires of Abandonment" and it is the next step in the evolution of MINSK.

The thick waves of sound and fat rhythms that are more akin to a group of mastodons moving in unison than a combination of bass, drums, and guitars are still present and impeccably melded with swirling sound effects into a NEUROSIS-tinged whole. The reverberations are heard on tracks such as "Embers", which to some degree blends the wispy atmospherics and suffocating weight of EYES OF FIRE with MINSK's earthy tones and tribal-esque drumming. It is also heard in the primal bass rumble and riff grumble, as the soul is purged through howls and shouts. But it is on songs like standout "The Orphans of Piety" and the long journey of "Ceremony Ek Statis" during which a more epic MINSK is heard. The art of emotional ebb and flow is perfected on "The Orphans of Piety", moving through sections of hypnotic bliss and muscular rhythms, melodic patterns (vocal and otherwise),and even a few lonely saxophone lines. Mammoth movements are heard on "Ceremony…" as well, the most surprising section featuring a Latin trumpet part over a kind of brutish Salsa beat that, though mildly surprising, is somehow not out of place. Balancing light and shade, "Mescaline Sunrise" sounds just as the title would suggest: alternately lucid and hazy, the sounds of plucked guitar strings ringing out as one begins to crawl back to reality.

"The Ritual Fires of Abandonment" is a more diverse effort than "Out of a Center Which is Neither Dead Nor Alive", although it is difficult to say that it is a better album. It is simply a different album. However, additional layers and previously undiscovered spiritual reservoirs often reveal themselves many listens later. Time will tell.