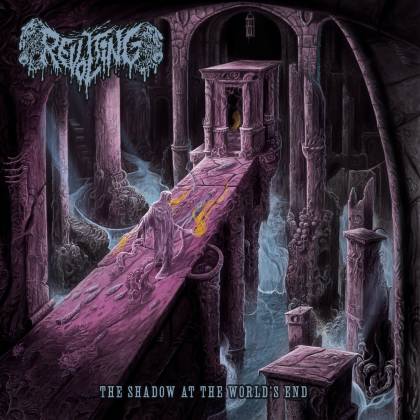 The Shadow At The World's End

How does ROGGA JOHANSSON find time to eat or take shit? With a dedication to death metal that is entirely unmatched in the modern era, Sweden's most prolific writer of skull-shattering riffs has had a particularly busy 2020. Happily, "The Shadow At The World's End" is easily the finest of the nine full-length records he has released this year, although if your enthusiasm for this stuff is sufficiently high, I do urge you to check out albums by BLOODGUT, FURNACE, GHOULHOUSE, HUMANITY DELETE, MEGASCAVENGER, MONSTROUS, REEK and THOSE WHO BRING THE TORTURE, all released within the last 12 months. Like I say, he's prolific.

Some might argue that there isn't a vast amount of musical space between one ROGGA project or another, but that depends largely on how much death metal you listen to. In truth, REVOLTING is a distinctive enough entity, sitting somewhere between the rabid brutality of RIBSPREADER and the more melodic vibes of his solo work. It feels significant that the band's seventh album boasts a bigger, meatier production than any of its predecessors, echoing the more grandiose thump of last year's "Entrance to the Otherwhere" solo joint, but ripping along at a much nastier pace, shades of VOMITORY and DERANGED adding to the intensity. Melody is used as a weapon throughout, with each song offering at least one blazing hook and several moments of headbang-until-you-puke grooviness. It's a far from one-track affair, however: REVOLTING incorporate a healthy amount of doomy melancholy into the likes of "Daggers That Mimic Life's Pain" and "1888", harking back to the horrified pomp of the Swedes' previous highpoint, 2012's "Hymns of Ghastly Horror".

Subtle refinements aside, this is ultimately a superior dose of ROGGA JOHANSSON's trademark, balls-out death metal attack. For speedfreaks, the likes of "Defleshed", "Carnage Will Come" and the title track deliver with malicious intent; a furious pace matched by the lethal catchiness of what can only be described as choruses. And when it comes to mid-paced bludgeon, few do it better than this: "1888" is an absolute masterclass in flagrant BOLT THROWER worship, right down to ROGGA's scabrous bellow, while the closing "Revolted By Life Itself" is a hypnotic fast-to-slow-motion pileup of riffs, each one more telling and tyrannical than the last.

It's still a minor mystery that ROGGA JOHANSSON isn't a higher profile figure in the death metal world. On this evidence, and the evidence of so many other great albums it will blow your fucking mind, he certainly deserves to be. Only death is real. Dig in (again).