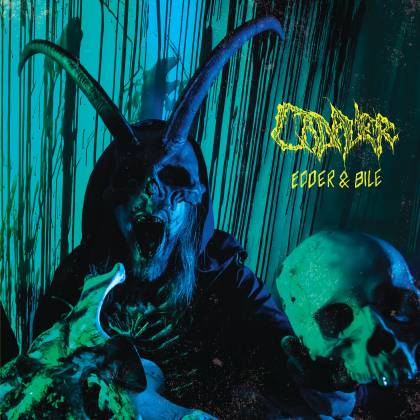 When it comes to unsung heroes of the metal underground, Norway's CADAVER have to be near the top of the pile marked "long overdue some goddamn recognition." Admittedly, it hasn't helped that the band's activity has been (to put it mildly) intermittent over the last three decades, but this long-awaited return delivers such a ferocious uppercut to the jaw that it's hard to imagine anyone not wanting to explore the other great records in the catalogue. The objective reality is that CADAVER were one of the very first European death metal bands to build an international profile, with a host of acclaimed demos and two albums released via Earache Records as the genre reached its first peak. Later incarnations of the band have either messed with the formula (CADAVER INC's album "Discipline", released in 2001, reimagined the band as a murder scene clean-up unit) or returned to it with a vengeance (the vicious "Necrosis", 2004). But "Edder & Bile" feels more significant and substantial than either of those, as if Odden is stridently reclaiming the Scandinavian death metal throne and having the time of his life in the process.

Having recently defeated cancer in real life, you can hardly blame him for delivering an album that sounds like war breaking out. Add in new foil Dirk Verbeuren (MEGADETH / ex-SOILWORK) behind the kit, and the new CADAVER is imbued with a venomous, wildly extreme streak that makes even their gritty, primitive early works sound a bit lackluster. One of metal's greatest ever drummers by any sane measurement, Verbeuren drives these songs along with balls-to-the-wall intensity, backing up his compadre's uniformly crucifying riffs with devastating precision. A few of these songs have been in the wild for a while now, but even the now familiar "Circle Of Morbidity" (which features POSSESSED's Jeff Becerra, and that should be all you need to know!) and singles "Reborn" and "Morgue Ritual" lose none of their shocking impact after repeat listens. Here, they're surrounded by several more of the dirtiest and most laudably malevolent death metal songs in recent memory. CADAVER never conformed to any particular deathly blueprint, and while the old-school classics cast a shadow over everything here (almost topping the Becerra cameo, MASSACRE legend Kam Lee pops up on the deeply gnarly "Feed The Pigs"),theirs is still a wholly individual sound, warped and wayward in that nebulous, nefarious Norwegian way, but permanently and proudly aiming for the jugular with teeth bared and eyeballs spinning.

You may pick your highlights from any number of neck-wrenching assaults. For sheer visceral thrills, "Final Fight" is a particularly bewildering blizzard of snot and spite, while the title track is pitch black and terrifying, Verbeuren's caveman power and jazzman's dexterity fueling an exhilarating descent into hell, with Odden as master of abyssal ceremonies. The closing "Let Them Burn" provides one telling moment of slow-motion violence: it grinds forward like a runaway panzer, grand but ugly melodic discord framing a powerhouse ensemble heavy metal performance. It all sounds every bit as imperious as you might expect from actual death metal legends with a point to prove. "Edder & Bile" is an absolute fucking ripper, folks.