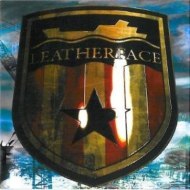 They may be of only tangential interest to the average BLABBERMOUTH.NET 'head, but cult U.K. punks LEATHERFACE might ring a few bells among the older and indie-r among you. Back in the late 1980's and early 1990's, when albums like "Cherry Knowle" and "Mush" were released, the press often tagged them as "HÜSKER DÜ meets MOTÖRHEAD," drawn to their urgent melodies and the atonal, gravelly croak of gutter-poet frontman Frankie Stubbs. And while they were a life-changingly good band, especially on "Mush", they seemed to have had more impact on punk and post-hardcore kids, largely responsible for the existence of bands like HOT WATER MUSIC and THE DILLINGER FOUR.

After a lengthy absence from the record racks, "The Stormy Petrel" has arrived with little fanfare (on these shores, anyway). It shows the band's age, in a way that's inevitable but not a bad thing — while it intermittently crackles with uptempo urgency, as on "My World's End" and "Nutcase", a lot of it goes instead for a world-weary, heart-on-the-sleeve melodic melancholy. Songs like "Broken" and "Hope" are threadbare and wistful, things of faded beauty and dessicated dreams. Stubbs's voice is all but a whisper at this point, and you can almost smell the stale cigarettes and old whiskey wafting off the microphone — his rough edges are largely sanded down and eroded by time, but he still gets across so much of the plaintive pathos that made the old stuff great.

LEATHERFACE are a gritty, workingman's kind of band, but amid the ash and stubble there's a whole lotta heart, clever wordplay, and even a few moments of beauty and light. Their bruised melodies and pub-crawl riffs aren't necessarily for everyone, but they're the kind of band that makes you remember what punk rock was for in the first place. The kind of band that never should have worked, and if not for heart, wouldn't have.