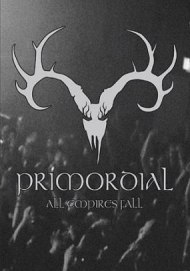 "All Empires Fall" is the story of an Irish band that formed way back in 1987 and travelled a hard road to pagan metal stardom; yes, "stardom," it's a relatively small community. It is also the story of a band that has always been true to its ideals. Through hard work, determination, and a resolute emphasis on making music for themselves first, PRIMORDIAL has not only survived a journey littered with defunct record labels and gigs during the early part of its career that often served more as practice sessions, but succeeded in building a sizeable and appreciative fan base, both in Europe and the too-often fickle U.S. Canadian fans on the other hand seem to have "gotten" it years before those in the States did.

That story is told in detailed terms in a documentary segment on Disc 2 called "Gods to the Godless: The History of Primordial, 1987-2010". While a 2009 performance in Dublin on Disc 1 — in a country that wasn't until later considered a PRIMORDIAL stronghold — is considered the centerpiece, it is the documentary that is mandatory for long-time fans and those that always wondered what all the fuss was about. Aside from some intellectually-stimulating information about the development of a style that still stands as distinct in the world of pagan metal, as well as an intriguing look at how the band navigated record label waters before arriving in the Metal Blade ocean, what tends to stand out is the pride shown in discussions of PRIMORDIAL's culturally-based lyrics. It is something that shows up throughout the documentary, frequently pointed out by charismatic front man and vocalist Nemtheanga (a.k.a. Alan Averill). Though not necessarily attention-hogging, the amount of time afforded to the vocalist occasionally leaves the viewer wanting more input from the other band members. However, much of that has to do with the comparatively introverted personalities of Nemtheanga's band mates, rather than any egomania on the part of the vocalist. Regardless, if it is a comprehensive look into the history of PRIMORDIAL that you seek, then you will not in any way be disappointed with "Gods to the Godless".

More than anything else, the 14-song performance in Dublin on January 24, 2009 shows the pure energy of a PRIMORDIAL performance. This is one band whose studio recordings will never capture the intensity of a gig. That says nothing about the quality of the studio albums and everything about the cathartic qualities of PRIMORDIAL on stage. Nemtheanga rises to godlike levels; his stage presence second to none and his enthusiasm infectious. The band as a whole has an uncanny ability to take a simple song and push it to ritualistic levels. The bonus footage from events like Germany's Ragnarok Festival (2008) are almost as equally captivating, if not as professionally presented from an A/V point of view. And I don't mean "professionally presented" in a slick, over the top sense; rather, the visuals are suited to the warm, organic feel of the music.

Though the documentary can tend to drag at times, at least for all but the most dedicated PRIMORDIAL fan, it is nonetheless meticulously assembled. As for those yet to experience the power of a PRIMORDIAL gig, you can't do better than the Dublin show featured on Disc 1. "All Empires Fall" gets it done, but then I've yet to see a Metal Blade DVD that doesn't.