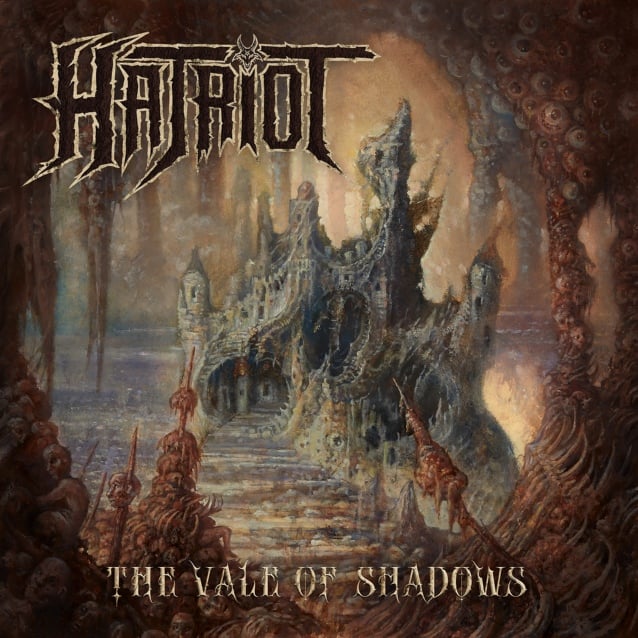 The Vale Of Shadows

Originally formed as a new outlet for the face-razoring vocals of EXODUS frontman Steve "Zetro" Souza, HATRIOT have more than earned their status as a modern thrash metal band of great significance. When Zetro fled the nest — not entirely surprising, given the grueling tour schedules that EXODUS commonly pursue — and bassist (and Zetro's son) Cody Souza took over as lead vocalist, the transition was seamless and briskly executed. 2019's "From Days Unto Darkness" was arguably the strongest HATRIOT record to date, and Cody's vocals were such a self-explanatory chip off the old ear-drum shredding block that it barely seemed like anything had changed.

Three years on, and radical departures from the crushing dexterity of their previous four albums are still firmly off the agenda. Not that HATRIOT lack imagination: "The Vale Of Shadows" is more vivid and varied than any previous record, and the songs feel sharper, harder and riddled with brutish intricacy. But if the whole purpose of this exercise is to inflict serious damage on the neck muscles of anyone in earshot, this band are pleasingly and fiercely dedicated to ticking that goal off the list.

From the blistering opening seconds of "Horns & Halos" onwards, "The Vale Of Shadows" is pure and unrelenting in word and deed. The real surprise is how many clever ideas HATRIOT have woven into an otherwise rigid, metallic structure. "Horns & Halos" is rich with metalcore melodic tropes, but smartly devoid of the tired cliches that generally follow; "The Hate Inside" is a mid-paced hate campaign with urgency to spare; "Forceful Balance" is a macabre, hyper-violent melo-death skirmish with speed metal trimmings; "Verminous And Vile" is a runaway tech-thrash rollercoaster, with additional rock 'n' roll swagger.

HATRIOT attack everything with such intensity that listeners may be slightly exhausted by the time they reach "Clemency Denied", but "The Vale Of Shadows" seems to blossom as it progresses. A pounding, thrash metal death march, it reinforces the old truth bullet that slow is nearly always heavier than fast, while eliciting a brilliantly inhuman vocal performance from Cody Souza. "The Twenty Fifth Hour" wallows in KING DIAMOND-like horror theatrics, before taking off at spine-wrenching speed, and with pitiless precision; "Only Red Remains" combines brute force grooves with bloody threats and hazy, skewed guitar solos. HATRIOT stick with this more nuanced approach for the title track, superficially a textbook thrash metal song, it packs an unsettling, melancholy punch. Meanwhile, elegiac interlude "Murderous Tranquility" and the two-minute, rabid onslaught of "Hymn For The Wicked" shines a light on both sides of this band's creative coin. If you want violence, it's here in abundance. If you want a dash of sophistication and class with your carnage, that's here too.