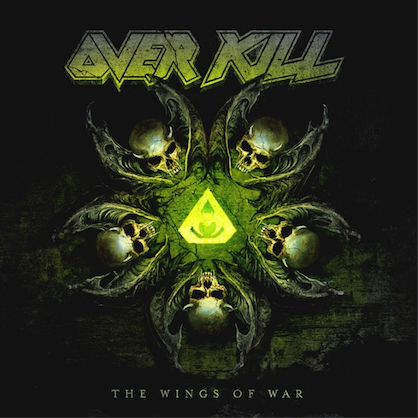 The Wings of War

If there is one thing that you can rely upon with OVERKILL, it is the act's consistency. The old-school basher has never significantly tinkered with the formula and core for which it is known. As the saying goes, "If it ain't broke, don't fix it." The New Jersey crew looks as gritty and gnarly as it sounds. OVERKILL churns out no-frills, meat 'n' potatoes thrash metal, but it was among the first cooks in the kitchen to create the recipe. The quintet returns in 2019 with its 19th album—you read that correctly—and "The Wings of War" is everything that longtime fans would hope for.

Sure, the style is in many ways conventional, yet OVERKILL's music has always been distinct and instantly recognizable. The signature riffing, D. D. Verni's bass-dominant assault, and Bobby"Blitz"Ellsworth's banshee-like screech come together resulting in a one-of-a-kind take on thrash metal. While Verni and Blitz are the only remaining original members, OVERKILL runs like a well-oiled machine also because Dave Linsk and Derek Tailer's twin guitar attack has been in place for nearly two decades. OVERKILL's only change since 2017's "The Grinding Wheel" has been in the drum department, with Ron Lipnicki being replaced by none other than Jason Bittner of SHADOWS FALL (and formerly of FLOTSAM AND JETSAM). With this potent dose of new blood running through OVERKILL's veins, the group hits the ground running on "The Wings of War" with the vigor of a band of twenty-somethings.

OVERKILL is like a rugged tradesman whose scope of expertise is narrow, but it does what it does very well. With a solid blue-collar ethic, the New Jersey unit—who pays homage to OVERKILL's stomping grounds on "Welcome to the Garden State"—has been persistent and has sharpened its tools of the trade. The band has honed its skills over time and deviates only slightly from its trademark marriage of rabid thrash with that which is groove-flavored. OVERKILL is void of pretentious excess, yet the unit has never been responsible for mindless riff salads either. The focal point is primarily moshing mayhem, yet it knows how to tailor its delivery to be nuanced and spiced enough with, for example, brief forays into doom metal territory to keep things interesting and away from a one-dimensional track.

It's an impressive feat for an aging thrash metal band to release one of its best efforts three decades into the game, and that's exactly what they did with 2010's "Ironbound". Now, the band is nearly 40 years old, and even though "The Wings of War" doesn't quite pack "Ironbound"'s punch, it is marginally better than the three albums sandwiched between the two: "The Electric Age", "White Devil Armory" and "The Grinding Wheel". While "The Wings of War" isn't essential nor mandatory listening, per se, it's most certainly good and entertaining, and it serves as a fine soundtrack for working out or getting ready for a night on the town.