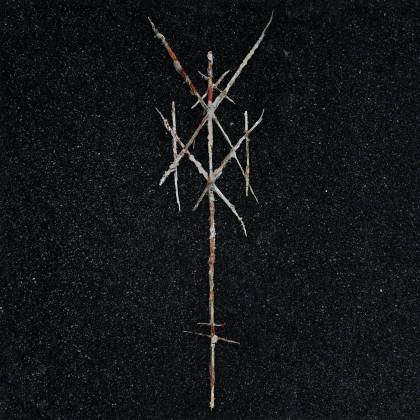 There's Always Blood At The End Of The Road

Black metal trio WIEGEDOOD were birthed from the same Belgian collective of musicians that gave rise to other recent, notable acts such as AMENRA and OATHBREAKER, with its membership also having served stints with those acts at different points throughout their careers. Much as AMENRA twists the apocalyptic-sludge blueprint of bands such as NEUROSIS by adding multiple layers of suffocating emotional weight and OATHBREAKER generates an artsier take on the metallic hardcore of CONVERGE, WIEGEDOOD takes the more pummeling end of the black metal spectrum and adds a caustic coat of industrial-metal grime to put forth a corrosive cacophony that is relentlessly sinister from start to finish. The trio's fourth full-length, "There's Always Blood At The End Of The Road", is their most furious assault of the senses yet.

WIEGEDOOD's latest record is an attempt to inflict blunt force trauma at every corner imaginable. The bludgeoning begins immediately on the opener "FN SCAR 16", and rarely lets up as the album progresses. The standard hallmarks of what have been the trio's traditional opening volleys are present once again, and even as most individual tracks are a bit shorter than the 8-to-12-minute sprawls populating their previous records, this isn't METALLICA going from "...and Justice for All" to "The Black Album". If anything, the trio triples down on everything they do, from the whirlwind of Wim Coppers's nonstop pummeling drumming to the ultra-discordant shredding by the guitar duo of Gilles Demolder and Levy Seynaeve. The shred generated by the guitar duo is once again in service of aural destruction as opposed to flashiness and has more in common with Seynaeve's throat-shredding vocals than histrionics from a myriad of guitar-hero wannabes.

WIEGEDOOD remains committed to a terrifying aura of metallic devastation, even during those few moments of slower-paced rest, which are lightly peppered throughout the record. The second half of "And in Old Salamano's Room, The Dog Whimpered Softly", sees the band dig into a trudging display of riff repetition evoking MESHUGGAH as filtered through a psychedelic trip gone awry. "Nuages"'s final minutes are punctuated by a lurching crunch riff and wailing moans that elicit a moody sense of despair. Even that is only after the first half of the track is propelled by a blistering assault best described as what it would have been like if METALLICA started "Kill 'Em All" by blasting their way through the opening moments of "Hit the Lights" multiple times in a row, with each individual burst being delivered with increasingly more urgency.

Seynaeve tearing his vocal cords apart with his caustic shouts — as well as a couple moments of more guttural pagan chanting on "Now Will Always Be" and "Carousel" — also goes a long way toward cementing the tornado that is the band's latest record. In an era where many bands put more thought into how ominous their band photography and provocative statements are than the actual music they generate, "There's Always Blood At The End Of The Road" is another example of why WIEGEDOOD stands out as a truly ominous force in the black metal genre based simply on their music.