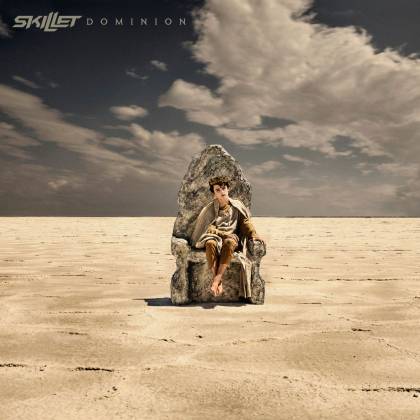 The basic foundation of SKILLET records is always built upon catchy choruses, straightforward song structures and female vocals (Jen Ledger) that provide a foil to male vocals (John Cooper) in just the right spots. It's the formula that's made them a multi-platinum Christian hard rock band. While they stick to that formula on their eleventh record, "Dominion", there are several elements that make it distinctly different from its predecessors. Most notably, "Dominion" offers an incredibly triumphant, positive tone, whereas earlier releases struck darker ones. Even when the tempo slows and conveys a greater sense of struggle, like the weighty song "Forever or the End", there is still a guiding sense of hope.

"Dominion" opens with three inspiring anthems full of fight and confidence. It's immediately clear the members are caught in a proverbial battle they're determined to win. In opener "Surviving the Game", Cooper (lead vocals, bass) pledges to follow "the way of the warrior. "Standing In the Storm", the best song on the record, spits verses with rhythmic patterns that are almost rap-like, using the more traditional chorus to deliver the unshakable message, "I've still got some life in me/ I've still got some fight in me." The title track follows that up with a ripping guitar solo and the decisive statement, "Our rebellion has begun." From here on out, the record is peppered with similar digital beats, rap-esque vocal deliveries and guitar solos, giving the radio-rock champions a little more dimension.

There are ups and downs in every war, but the piano-based ballad "Valley of Death" sinks the excitement brought by the first three songs with its stereotypically Christian lyrics and saccharine melodies, losing fans who don't subscribe to gospel. A much more successful version of this track is "Refuge", whose consistent build, percussive backbone, shorter runtime, and slightly more relatable lyrics appeal to a wider range of listeners. Though not ballads, "Beyond Incredible" and "Shout Your Freedom" are similarly much more formidable versions of the song "Destiny".

The penultimate track, "Ignite", is one final push toward "setting the world on fire" (as they say in the song). This is where "Dominion" should end, but instead, "White Horse" is an oddly dissonant, industrial-sounding finale that would've made much more sense as a bonus or hidden track. Ultimately, just as there is a push and pull between oppressive and liberating forces in the theme of the record, there is tension between disjointed and cohesive elements in its sound and structure. While certain tracks are enjoyable individually, the fragmented parts don't add up to a satisfying whole.