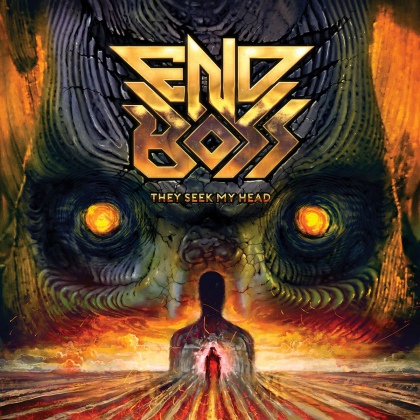 They Seek My Head

Thanks to the undeniable fact that big riffs and a touch of the blues are always going to resonate with a lot of people, there is unlikely to ever be a shortage of stoner-friendly, sludgy metal bands. That's good news, of course, but the future would look even brighter if a fraction of those bands had END BOSS's charm and bowel-rattling power. "They Seek My Head" doesn't fuck about: eight songs, 33 minutes, lots and lots of giant, distorted riffs. But rather than conforming to any previously established formula, commendable or otherwise, this New Zealand quartet have found their own unique and mesmerizing brew. As ever, it's all in the songwriting. Opener "Heart of the Sickle" fulfils the fuzzed-up, lumbering brief, but vocalist E.J. Thorpe's melodies are wickedly askew, her delivery loaded with otherworldly intent. "Becomes the Gold" shuffles along in classic doom mode, but the song that unfolds from those hulking riffs belongs somewhere entirely different — some perverse midpoint between dreamy shoegaze and macabre occult rock, with alt-rock sensibilities in the mix too. Slowed down to an oppressively woozy crawl, "Covet" is an instant gem, absurdly heavy, but with E.J.'s ethereal cries emerging from a treacly sweep of the riffs to gently hypnotic effect, and with faint but welcome echoes of GOATSNAKE. In contrast, "Nail & Tooth" takes a hatchet to a more conventional, stoner rock template, adding the incessant forward thrust of space rock to a conflagration of strutting fuzz.

END BOSS are a versatile bunch. After rocking harder than most on "Nail & Tooth", they descend even further into slow-motion torment on the accurately titled "The Crawl". Curiously, it's one of the most instantly memorable tunes here; a burly but bruised waltz that builds to a stupendously bleak climax. The snappy, psych-metal of "Lorded Over" and the warped true doom of the closing title track complete the picture. The former makes no bones about its evolved desert rock credentials, while the latter is steeped in essence of lysergic, snail's pace macabre. None of this is rocket science, of course, but END BOSS have the songs and the charisma to make overdriven, red-eyed blues-metal sound like a brilliant idea, still to be fully explored.