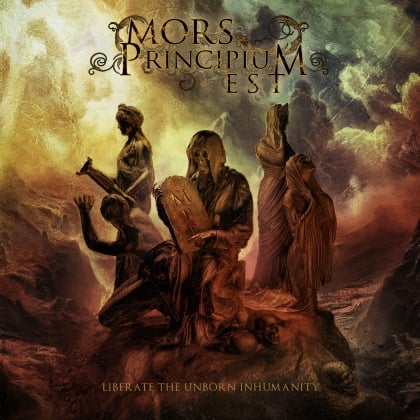 If you want melodic death metal that will absolutely take your face off every time, MORS PRINCIPIUM EST have been as reliable as anyone over the last 20 years. A collection of re-recorded cuts from the Finnish band's first three albums and early demos, "Liberate The Unborn Inhumanity" reinforces that point. It's immediately apparent that these songs are considerably more powerful and dynamic than their earlier incarnations, and that the intrinsic timelessness of MORS PRINCIPIUM EST's sound makes this feel much more like a new record than some stopgap indulgence.

The opening "Cleansing Rain" says it all. Continuing the unashamedly ripping, sledgehammer melo-death approach that reached a new peak on 2020's "Seven", the Finns sound immaculate and ruthlessly precise. Perhaps more importantly, this new sonic environment has given everything room to breathe, and MORS PRINCIPIUM EST's trademark melodies shine like never before here. Similarly, frontman Ville Viljanen is twice the vocalist he was back on the original version of "Eternity's Child" (from the band's 2003 debut, "Inhumanity"),and his incensed, pugilistic delivery adds yet more momentum and intensity to this welcome redux.

Thereafter, it's a simple matter of locating your favorite early MORS PRINCIPIUM EST tunes and hearing them reborn in dazzling Technicolor. For my money, a wonderfully lavish new rendition of "Pure" (the opening track from 2005's "The Unborn") is an obvious highlight, as the Finns' highly evolved arranging skills come into play on one of their most bombastic epics. Likewise, the two-part "Valley Of Sacrifice" (originally the centerpiece of the band's second demo in 2001) is a startling feast of great ideas, sublime hooks and casual complexity. In particular, "Valley Of Sacrifice, Part 2" is a riotous, over-the-top showcase for the sheer sophistication of MORS PRINCIPIUM EST's songwriting, even in their nascent early years. Brutal blastbeats, lashings of gothic pomp and several jaw-dropping virtuoso guitar solos: it's all going on. Admittedly, this band have released material in recent times that exhibits a greater range of emotions and depth of imagination. But for a direct and jolting dose of epic, symphonic melo-death, executed by certified experts in their field, "Liberate…" is an unquestionable triumph.