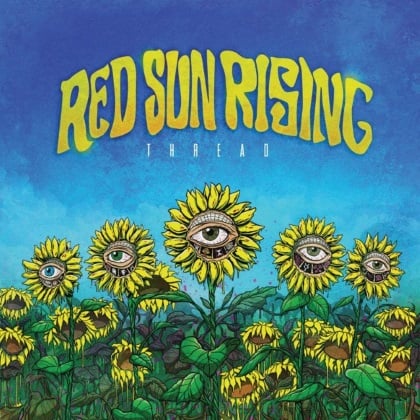 Following a couple of independent albums, Akron, Ohio's RED SUN RISING made tidal waves in mainstream waters with 2015's "Polyester Zeal". Standout cuts like "The Otherside" and "Emotionless" were number-one-ranking singles. Would the band be able to meet its own high-water marks? The Billboard chart-busting, rock sensation returns with follow-up "Thread", a release that should squash any doubts that RED SUN RISING might have been nothing more than just a flash in the pan.

Even though it's been a band since 2007, the unit is, in a sense, essentially a relatively new band because of a significant lineup shakeup. Lead vocalist/guitarist Mike Protich and lead guitarist Ryan Williams, who actually founded the band following a chit chat about music at a gas station, were joined by bassist Ricky Miller, drummer Pat Gerasia and rhythm guitarist Dave McGarry in 2015. Other than McGarry, the aforementioned crew were on the major label debut "Polyester Zeal". The current lineup has been together for a period of time that's short enough for it to still retain the vibrant quality and nature of a fresh band coming out of the gates.

It's likely that the frontman would agree. "This album feels like a rebirth," Protich said via a press release. "Although RED SUN RISING played 140 shows on our last tour, it was not until we made this album that I felt we became a band. The growth and evolution of RED SUN RISING that you will hear in our sound and our songwriting builds on our 'Thread' mentality—songs that people can love and sing with us but don't fit a mold. We aren't chasing trends and never will." As obligatory and clichéd as this may sound, and while the group isn't necessarily breaking new ground, it is proving its impressive finesse with regard to crafting soothing, feel good alt rock songs.

On the flip side, the unit's years spent together also means its been together long enough to boast the virtues of a band that has grown toward something. Measured against "Polyester Zeal", "Thread" is much more diverse and expansive. The sound and style is far removed from what one may expect to hear at a grimy dive bar. Instead, the resonance is decidedly slick and clean, drawing from post-grunge and late '90s alt rock linking all the way through to the primary qualities of today's popular rock mainstays. "Left for Dead" simmers with memorable melodies and an upbeat nature that summons the spirit of latter-day SOUNDGARDEN in the briefest of moments before finally boiling with an impassioned climax that's heavy but more in terms of emotion than crunch.

In stark contrast to the bright and clear production aspects of "Thread", RED SUN RISING proves its able to reach deep into the pocket of the more brooding aspects of rock thematically and melodically. Album finale "Evil Like You" slithers forth with creepy energy and melodies from start to finish. An almost transcendental quality slides into the midsection of "Lonely Girl" with a dark edge to what still ends up amounting to an expression of feel good romp. Invariably, the group naturally shifts into a gear that's undeniably catchy and uplifting. Through and through, RED SUN RISING is continuing to prove its one of rock's new stars.