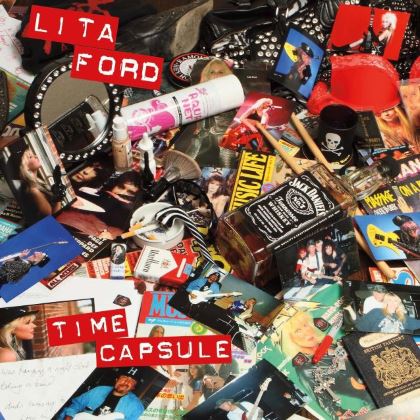 Suffice it to say, Lita Ford's had herself quite an odyssey the past few years. Letting the ruts lie within the rough roads weathered, Lita follows up her fan-pleasing 2012 album "Living Like a Runaway" in pretty sizable fashion. She drops a new autobiography, "Living Like a Runaway: A Memoir" this year, sided by an archival treat for her devout, "Time Capsule".

Dusting off a handful of lost analog tracks recovered from her onetime home in the Caicos/Turks islands, Lita Ford embraces her formative years as a solo artist ala "Out for Blood" and "Dancin' on the Edge". She resurrects, if barely dresses up these previously-unreleased songs from her past, save for inviting a pocketful of rock celebrity to her reboot party. The leitmotif to "Time Capsule" is to keep it straight and keep it real, even if that means less polish. For the most part, "Time Capsule" is an entertaining fling down Lita's own wayback machine before "Kiss Me Deadly" and "Close My Eyes Forever" escalated her into hard rock eminence. It will certainly give longtime fans something fun to chew on.

Opening with a comical if disturbing intro with ex-W.A.S.P. guitarist (and ex-Lita flame) Chris Holmes outlying Lita's departure from a presumed household in turmoil for a life of rock 'n' roll, the album snakes into "Where Will I Find My Heart Tonight". Threading a sedate acoustic reel overtop some of the grubbiest riffs Lita's shared since the "Out for Blood" days, "Where Will I Find My Heart Tonight" is one of the subtly heavier songs she's done in ages. Jeff Scott Soto drops some killer shrieks as Greg Buahio and Rodger Carter (the Eddie Money band) keep a dialed-down bass and drum line behind Lita.

The emphasis on letting it ride through a minimalist course and seeing what emits carries into "Killing Kind", another sprawling jam with Billy Sheehan, Dave Navarro (playing mandolin) and Rodger Carter plugging carefree spools for Lita to peel off greasy licks and grizzle out. Even better, CHEAP TRICK's Robin Zander and Rick Nielsen chime some appealing backup vocals. It's a gnarly, understated song that catches.

Sheehan hangs out for the moody if melodic "War of the Angels", a presumed slice out of Lita's youth. Her abbreviated guitar solo wails hard, while Billy Sheehan nobly checks his theatrics in favor of giving Lita's songs undertone instead of flash, even on "War of the Angels"' elevated, cinematic finish. Sheehan's most palpable on the bluesy and coiling "Black Leather Heart", one of "Time Capsule"'s toughest (if ultimately goofiest) songs.

"Rotten to the Core" is the centerpiece of "Time Capsule" for its KISS connections, featuring Gene Simmons lobbing his demon bass and Bruce Kulick riding shotgun with second guitar. The song is one of Lita's finest cuts (along with the hefty closing rocker "Anything for the Thrill") with its snarling rhythm and juicy riffs, capped by a superb tag solo with Kulick that should have the faithful feeling great for Lita. Afterwards is a purposefully blithe instrumental hike of Jimi Hendrix's "Little Wing" featuring former ODIN bassist Jimmy Travis, who takes on the remainder of the album as Rodger Carter does the entire thing.

It's Travis, not Sheehan, whose knocks are turned loose, if still keeping things toned down to allow Lita to grind away on a second instrumental, "On the Fast Track", decidedly an "Out for Blood" outtake. It has a catchy if roughshod groove only marred by a deliberate spike then turning down of Jimmy Travis in the mix. On the flipside, "King of the Wild Wind" (more in line with the "Dancin' on the Edge" days) is a chewy blues ballad tweaked up just enough to keep it tight and give Lita open space to rip her best vocals on the album.

One can see why "Mr. Corruption" was left in archive hell due to its silly choruses, yet the case for giving it a rebirth is made by the meaty riffs and undeniable hook on the verses. Lita's solo is just filthy, giving the song a sense of worth despite its foils. One automatically suspects Lita used this song as a healing stone while dusting if off.

"Time Capsule" is intentionally rough around the edges but honest as much as turned out for kicks. Take it as it is or don't take it at all. By now, Lita Ford's beyond caring who'll praise or condemn her name. She's obviously been in need of rekindling the spark that gave her verve and these past two albums have steered her in the right direction.