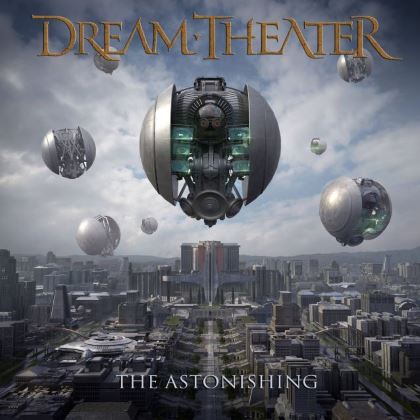 Coming into a DREAM THEATER album, one sometimes suspects the band is out to build their own "Tales From Topographic Oceans" minus YES's copious splooges of ultra-weirdness—the latter being a double album both revered and reviled. DREAM THEATER's latest work, "The Astonishing", is hardly "Topographic Oceans", yet if you're hanging all the way through this one hundred thirty minute, two act set, you'll detect a wanton kindred spirit in spots. Mechanical wheezes and tinny street wars set in a distant future replace the roundabout (pun intended) audile tempest fluttering about Jon Anderson's rampant interpretation of the Hindu shastras. In DREAM THEATER's case, "The Astonishing" is glossed by cinematic overtures, lovesick melodrama, seventies pop and perhaps one Disney film score too many.

A project this vast is best analyzed with an overview as opposed to track-by-track dissection. The grand perspective to "The Astonishing" is to say it's a 34-song dystopic sci-fi opera, and even for DREAM THEATER fans, it's a demanding excursion. It's not without spectacle, but it is an excessive and largely trudging prog affair that challenges even "The Postman" for excess.

"The Dystopian Overture" and "2285 Entr'acte" are the most rousing parts of this colossal undertaking as DREAM THEATER pours cinematic overload into it. Think of it in the old movie theater days of "Ben-Hur", "Doctor Zhivago", "Spartacus" and "The Ten Commandments" with actual intermission breaks and overtures signaling viewers to their seats during each portion. "The Dystopian Overture" launches "The Astonishing" with a burst of energy carrying into the brisk and peppy "The Gift of Music". Similarly, the stirring and emotive "Moment of Betrayal" swoops out of its Act II setup from "2285 Entr'acte". Otherwise, this album takes its time in more ways than one; "The Astonishing" rolls and glides more than explodes as it does in the early moments of each act.

Crunchy marching, horse neighing, gutter clashes, computer bit noises and nerdy noodling bring DREAM THEATER's totalitarian realm to life behind staggering numbers like "A Better Life", "Brother, Can You Hear Me? " and "A Savior in the Square". The tough chomp and street scrapping noises on "The Walking Shadow", "The Path that Divides" and "A Tempting Offer" are reminiscent of QUEENSRYCHE's "Operation Mindcrime", to which DREAM THEATER partially aspires on this album. In their case, with a more operatic methodology.

"Lord Nafaryus" (as in nefarious, get it?) is pushed with as much stamping theatricality as can be gained, even with morose slowdowns designed to increase agitation. The sweeping strings and solemn piano melody on "Act of Faythe" are gorgeous (ditto for the acoustic euphoria on "Heaven's Cove"),as the song assumes a seventies pop swoon through the first four minutes. It gracefully drifts to close with a brief symphonic bomb and a siren-chimed outro as sweet as James LaBrie's tireless crooning on the whole album. Keep in mind, LaBrie battled back from a potentially career-threatening vocal impairment years ago. The fact he not only perseveres but submits himself to this marathon and gives life to "The Astonishing"'s cast of characters: it's flat-out, well, you know.

Ballads abound on this album. The reprised melody spanning many of these songs ring like ABBA's more eloquent offspring, think "The Winner Takes it All". "The Answer", "When Your Time Has Come", "Act of Faythe", "Chosen", "Begin Again", "Losing Faythe" and "Whispers On the Wind" will capture the hearts of the band's more sentimental listeners. The gusting "The Road to Revolution" and the regal stride of "Brother, Can You Hear Me? " are superb.

"Three Days" is one of the album's most interesting tracks, inhaling more than a few airs of Danny Elfman's cinematic cavalcade with near-hilarious splashes of Bach and rag for fun, along with a few tempo torrents. YES influences are prevalent all over the intro to "A Life Left Behind" before it sways into power pop mode. YES and a billion other well-threaded components go into the sprawling 7:41 prog odyssey "A New Beginning", the song most reminiscent of older DREAM THEATER. "The X Aspect" grows powerful with each soft spool sending it astride, concluded with a weird yet poignant bagpipe and choral outro.

The hopeful message of "Our New World" and the windswept finale, "Astonishing", bring catharsis to this often rambling album with the scraggly ersatz of "Power Down" marking John Petrucci's considerable concept, one he has envisioned having multimedia crossover potential. Don't be surprised to find a video game or even a comic book evolve from this album as RUSH's "Clockwork Angels" did through Dynamite Entertainment comics.

On the one hand, "The Astonishing" could go down as one of DREAM THEATER's most lauded enterprises. On the other hand, unless you're a diehard, "The Astonishing" will leave you wrung out. It's beautifully arranged at every turn, the performances are nothing less than professional and at-times, this album is breathtaking. That being said, the scope is a bit much and minus the natural order of reprises within a movie-like atmosphere, there is not enough overall variation to make the entire expedition as compelling as intended. Loyal fans will nonetheless revel in all two hours and ten minutes of it.