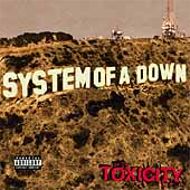 SYSTEM OF A DOWN

The hardest thing for a band to do is follow up a successful debut album. Your whole career builds to that first release, you sometimes spend years honing those songs, and then after the initial success (if you're lucky, of course),you're expected to repeat the whole thing, usually in a fraction of the amount of time it took to get to the first one.

In the case of SYSTEM OF A DOWN, not only was their debut album a success (scanning nearly 800,000 copies in the US alone),but the band emerged as frontrunners on the nu-metal scene, thanks to their highly iconoclastic sound (blending everything from thrash to New Wave to Eastern European influences) and politically-charged lyrics. But SYSTEM took a long time to write and record their second album, Toxicity, and the results are nothing less than stupendous. In fact, Toxicity is not only an easy contender for Metal Album Of The Year, but it may prove to be one of the new millenium's first authentic masterpieces of the genre.

Many bands often say, when promoting their latest album, that their new sound simply improves upon the work that came before — i.e. "we made the heavy stuff even heavier and the melodic stuff even more melodic." In the case of Toxicity, this is exactly what SYSTEM has done, and they've done it to perfection. The opening trio of "Prison Song", "Needles", and "Deer Dance" pummel the listener into submission with massive riffs and Serj Tankian's confrontational vocal style, while tracks like "Chop Suey", "Forrest" and the profoundly moving album closer, "Aerials", bring a deeper emotional resonance to the fore than perhaps any other nu-metal act has dared do before.

The "wackier" tracks — "Shimmy" and "Bounce" come to mind — may turn off some of the more aggressive-minded listeners out there, but they still work well within the context of this thoroughly engaging and unpredictable band. The songwriting is right on the money in cut after catchy cut — a rarity in this age of albums comprised of one or two good tunes and fifty minutes of filler. There's less of the Armenian flavorings here, but plenty of heaviness to satisfy hardcore SYSTEM fans.

In an era where countless soundalike bands are rolling off the corporate music industry assembly line, SYSTEM OF A DOWN have established themselves, with Toxicity, as one of the few bands that people may still be talking about ten years from now. No sophomore slump here.