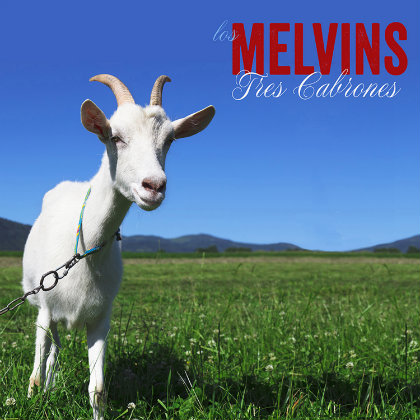 30 years in the life and what a mondo bizarro ride it's been for the MELVINS. It's only appropriate they mark the occasion with a distorto-huffing nutjob album featuring the 1983 lineup. Buzz Osborne and Dale Crover reunite with original drummer Mike Dillard for the sometimes messy, always loud "Tres Cabrones", a splooging rawk party catered specially for MELVINS muties.

Sampling the album's gonzo liner notes scored with mangled cars and a hilarious portfolio of grinning goats, the immediate impression of "Tres Cabrones" is this played strictly for kicks. Four songs in, the out-of-nowhere hoedown hooliganism staked by the MELVINS' hike of the raunchy camp classic "Tie My Pecker to a Tree" busts up any sense of uprightness to this album. For a moment, you almost think the MINUTEMEN revived D. Boon and got back together to hit the stoner trail. From this point, it's a safe assumption "Tres Cabrones" is going to ring every bit the car wreck the packaging implies. That's largely to the good.

Crover shifts over to bass and supplements "Tres Cabrones" with extra percussion, King Buzzo wrangles every oozing squawk he can out of his frets and Mike Dillard comes to this goofball gala with his chops on full display. Osborne wrote ten new songs for "Tres Cabrones", splicing them with nerdy and gut-busting rips on "traditional American folk songs" (as cited by the liner notes) including "Tie My Pecker to a Tree", "99 Bottles of Beer" and "You're in the Army Now". The latter is especially comical with the ensemble chanting "bitch, bitch, you son of a bitch!" with humping drums and nutty static assisting the trudging hilarity.

Many songs on "Tres Cabrones" are sludge-crushed ditties such as "Doctor Mule", "City Dump", "Psychodelic Haze" and "Stump Farmer" that will ring like raucous pleasure pills to longtime fans. The old BLACK FLAG and FLIPPER fuzz-dragging ethos that first inspired the MELVINS are back at work here, only with more accouterments such as swarming synths and other assorted aural flotsam smudged into the tunes. "City Dump" is one of the meatiest songs on the album and should emerge as an immediate fan favorite.

The seventies era of KISS plays a hand in the grinding "Dogs and Cattle Prods" until the distortion is turned down minus some rear filters while Osborne lays down a ZEPPELIN-esque acoustic line that morphs and slows through quirky child's piano lines and a mucky deconstruction to its brittle finish. Afterwards, "Psychodelic Haze" hacks away with Dale Crover's punctuated bass whumps and King Buzzo's reeling guitar gasps that pull in a sliver of Ozzy Osbourne's "Believer" as part of the song's primary melody. The irony of Buzz Osborne's twisted homage is hardly lost here.

Expect more absurdity on "99 Bottles of Beer", which wraps on a looped "beer" mantra accompanied by chunky instrumentation, leading into the completely bonkers "I Told You I Was Crazy". Instigated by shrill stylaphone screeches from Osborne and a subsequent demonic doom march, there's more than a bit of honesty playing into the song's title. Osborne and Crover jerk every malevolent tone they can through a prolonged period of unhinged strings and electronics as Mike Dillard lays down a sluggish beat ushering the ear-gouging bedlam around him. The Pong-esque blipping at the end of the song marks a point of salutation to the MELVINS' first slogs out of the Atari age.

"Walter's Lips" (also a nod back to the band's formative years as seen through the omnipresence of late famed reporter Walter Cronkite) exhibits a gleeful punk ploy hijacked straight out of early English punk, i.e. THE VIBRATORS, THE ADVERTS and SHAM 69. It thumps heartily along as one the album's gnarliest jams, while "Stick 'em Up Bitch" steps on the gas a bit, staying in classic punk mode and taking "Tres Cabrones" home on a high note. Dale Crover rolls some impressive winding lines beneath Buzz Osborne's humming distortion and Mike Dillard's tapping tempo.

Stripping down the dense layers of more-recent albums such as "(A) Senile Animal", "Nude with Boots" and "Freak Puke" for this way-fun bro-down from the MELVINS' Class of '83, "Tres Cabrones" is chaos personified. However, Osborne, Crover and Dillard do kick a lot of ass while spreading their frequently shambolic audile goo. The intentionally-slipshod clapping at the end of "Doctor Mule" affirms early-on that "Tres Cabrones" takes itself as seriously as a Friday night crank pull. Nonetheless, for all of the lunatic fringe spread throughout this album, it does tighten up more often than it doesn't and it's sure to be received giddily by MELVINS aficionados.