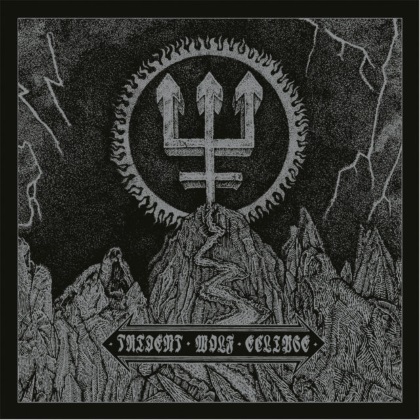 Ironically enough, and quite contrary to the darkness they surely wish to portray, the spotlight upon Sweden's WATAIN has shined quite brightly in terms of fanfare. The unit's notoriously vile live performances and consistently impressive and singular take on Scandinavian black metal over the last couple of decades has cemented its place as one of the genre's most important bands in the new millennium. Around the period of the highly acclaimed 2010 album "Lawless Darkness", a release that saw it win a Swedish Grammy Award, the group seemed to begin to approach a fork in the road. Would they leap toward CRADLE OF FILTH caliber outlandishness, or would they maintain a trajectory along the most filthy and unkempt gutter of the left-hand path?

For stubborn purists, the types that insist that every black metal band needs to eternally attempt to recreate DARKTHRONE's abstract slice of hell that is "Transylvanian Hunger", the Swedes took the "wrong turn" on 2013's "The Wild Hunt", a more diverse release that encompassed elements of progressive and traditional heavy metal. The focal point for this pocket of disheartened, clenched-fisted fans was the album's nearly nine-minute long epic track, "They Rode On", because of Erik Danielsson's melodic singing, the sparse backing female vocals and the acoustic driven gothic sensibilities. The song is compelling at its best moments, a shoddy and meandering slow-burner somewhat reminiscent of METALLICA's "Nothing Else Matters" at its worst. In fairness, the album successfully sculpted a dynamic journey. It was too much of a departure for some, quite vocal, conservative minded black metal enthusiasts, however.

But perhaps WATAIN's fork in the road truly arrived following the highly divisive aforementioned release. Would the unit continue to journey along a path now ripe with fruits of progressive metal and experimentation, or would they return to the path more familiar? "Trident Wolf Eclipse" suggests the that band has chosen the latter. Outsiders can speculate as to whether the shift was due to career-minded concerns and appeasing its long-standing fanbase, or if the more traditionally sounding black metal album was a result of creative desire. Whatever the motivations were, "Trident Wolf Eclipse", the band's sixth full-length studio effort, is rich with interesting, intricate, full-throttle black metal that entails a transcendental quality oozing throughout the release, captured masterfully by producer Tore Stjerna. While it's certainly a safe move career-wise, "Trident Wolf Eclipse" is an impressive album measured against second wave black metal standards without being run-of-the-mill. Within those boundaries, and to their credit, WATAIN has carved out its own pocket.

WATAIN's characteristically nefarious aura and atmospherics remain, yet the ensemble has arguably never sounded so cut-throat in approach. "Towards the Sanctuary" includes some of the fastest material of the band's career. "Trident Wolf Eclipse" is indeed chock-full of blast-beats and belligerence. Opener "Nuclear Alchemy" adequately represents what follows as it explodes with a frantic attack that thrashes and rages with MARDUK-like intensity and effective tempo transitions. An outburst of chaotic war metal fracas and soloing even arises, not to mention the catchy, recurring chorus line. Håkan Jonsson's skillful percussion is the glue that holds the mania together and that steers the abrupt tempo transitions in an album that was meticulously crafted from beginning to end. There's so much going on at such a high velocity that multiple listens are required to fully appreciate and comprehend everything that unfolds.