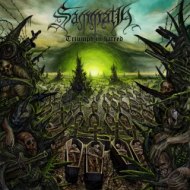 An Australian transplant to Holland, Jan Kruitwagen began his SAMMATH trip in 1994 and hasn't looked back, releasing several demos, promos, CDs, and LPs in the process, including the subject of this very review, "Triumph in Hatred". While it is without a doubt a hateful and violent exercise in barbed-wire strangulation the black metal way, the songs occasionally suffer from a degree of redundancy, which in and of itself it not a major issue for the style, except that the musical missteps and an awkward vocal treatment become distracting.

Now, before it seems as though I'm treating "Triumph in Hatred" with an insufficient amount of fairness or am failing to recognize a high enough level of triumph or hatred, allow me to set the record straight. In the using the statement "hateful and violent exercise in barbed-wire strangulation the black metal way" I genuinely mean that the music of "Triumph in Hatred" will decapitate first and ask questions later. The is one of those black metal albums that overwhelms with a DARK FUNERAL-like symphony of caustic riffing and scathing chords, whilst drums blast away with little reprieve. Granted, there is a little more variety in the arrangements than what that may have led you to believe, but it is nothing to get excited about either.

As for the album's main issues, one has to do with a production that is so crisp and clinical, right down to the enhanced typewriter kick drums (as opposed to the lo-fi typewriter variety),that one fears the riffs will seize up, split apart, and fall to the floor. Still, the death-by-treble approach can be useful in ridding you of annoying neighbors and travelling ministerial types. Another problem is that Kruitwagen's vocal treatment almost works at cross purposes with the arrangements, to some extent because of the patterns and the rest due to an often unconvincing croak/rasp; not horrible, but not helpful either. Finally, for every arrangement twist that works, there is an equal and offsetting one that alienates, such as the failed attempt at epic soloing during "Burn in the Fires of Hell".

What you end up with is an album in "Triumph in Hatred" whose negatives fall short enough of matching the positives to barely keep the rating from falling to a level indicative of sub-mediocrity. Incidentally, the label situation is as follows: the vinyl version was released by Apollon Records, the CD version by Folter Records.