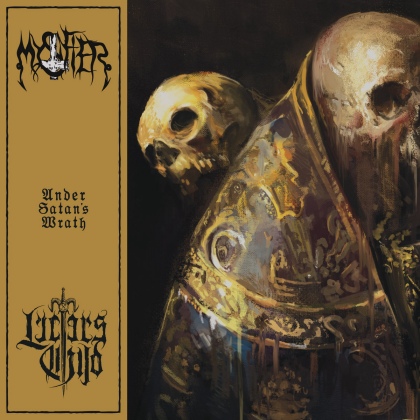 Demos and splits have been cherished building blocks for numerous death and black metal bands since the tape trading days of the early eighties and nineties. While the rightfully romanticized tape trading network is now a page from a chapter of metal's past, to new bands the value of these kinds of releases continues to be relevant. Established bands, too, keep that flame burning. Brazil's classic blackened death horde MYSTIFER has just partnered with the Greek black metal entity LUCIFER'S CHILD for a thoroughly enjoyable split release titled "Under Satan's Wrath", a collection that features three tracks from each band.

MYSTIFIER has been spewing its bestial sonic bile since 1989, revered among devotees of death, black and war metal alike. The Brazilians go for the jugular right from the get-go, as "Death Beyond Holy Creation" charges with a bold, classic heavy metal energy before swelling up toward an absolutely epic black metal chorus. "Under Inhumane Evil Spells" continues to forward that juxtaposition of filthy black metal and spirited melodic metal that somehow comes together in a way that makes sense. Both bands include a cover among their three songs, and for MYSTIFIER they take a stab from SAMAEL's debut album, "Worship Him". MYSTIFER's version — interestingly titled "Worship Her" — isn't nearly as haunting and ominous, but it's a solid cover nonetheless, befitting of MYSTIFER's sound and style.

LUCIFER'S CHILD, meanwhile, is a much newer project comparatively, though it features a seasoned musician within the Greek extreme metal scene, George Emmanuel, whose contributions include his time with ROTTING CHRIST, as a long-running live musician, as well as his performance on "To The Depths We Descend", NECROMANTIA's farewell release. LUCIFER'S CHILD similarly makes its mark immediately on "Satan's Wrath" with absolutely scathing vocals, frenetic riffing and manic blasting. A perfect pairing with MYSTIFIER, LUCIFER'S CHILD also marries ominous abrasion with beautiful melodies. "Nova Tenebris", however, builds up slowly and swells with a sense of drama that's not too far removed from that of late nineties Norwegian black metal artists, as the track progresses toward a grandiose, operatic conclusion. A cover of BATHORY's "Enter the Eternal Fire", from 1987's "Under the Sign of the Black Mark", rounds out the split release. LUCIFER'S CHILD's take on the classic black metal song isn't bad altogether, but it's the weakest link on "Under Satan's Wrath" because it's just too polished compared to the original song that shines bright because it's so rough.

While the latter cover was far from perfect, LUCIFER'S CHILD's contribution to the split was formidable, to say the least, and MYSTIFER continues to prove itself to be consistently good and true to its core sound. "Under Satan's Wrath" is a logical unholy union of bands that simply fit with one another. It's an interesting release that highlights the core facets of both bands.